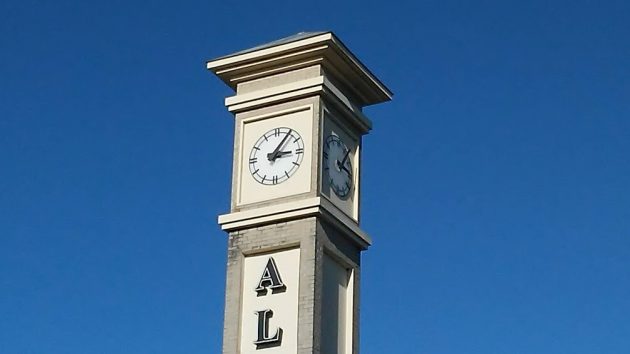 It actually was 3:06 p.m. when this photo was taken Wednesday. The other two clocks said so too.

Just in time to have to be reset again for the time change Sunday, the clocks on the tower at Albany Station have been fixed. Now they all show the same time, and when I checked on Wednesday afternoon, what they showed was exactly correct.

A month ago, on Sept. 29, after a reader had called my attention to the clock tower, I reported on the trouble with the clocks on all four sides here.

On Wednesday it occurred to me to check. And what do you know — the two faces I could see from my vantage point showed the same time, which happened to coincide exactly with when my phone said the photos were taken: 3:06 p.m.

And this morning, Tom Valentino, the city of Albany’s facilities maintenance supervisor, confirmed it: Foress Sign Co.had fixed the clocks yesterday afternoon. It must have been just before I went by there.

The plan had been to replace the clocks’ motors. Three had seized up and the other one was slipping. Valentino said the bill had not yet come in, but the replacements were supposed to cost about $250 each.

Standard Time returns early Sunday. So before then, somebody will have to reset the tower clocks back an hour.

This will have to be done manually. But no one will have to go up there. Valentino says the controls are at the bottom of the tower.

As for the time change itself, pointless as it is because “daylight saving time” no longer saves anything, wasn’t that supposed to be behind us by now?

Yes, the Oregon legislature voted for Oregon to stay on daylight time all year as California voters and Washington legislators had also wanted to do. But this requires the approval of Congress, and Congress did zip.

Bills to abandon the time switches in fall and spring have been introduced in Congress but gone nowhere. I looked for a sign that the House members whose districts include parts of the mid-valley, Peter DeFazio and Kurt Schrader, had made an effort along that line, but I looked in vain.

With all our problems now — the virus, the election, and all the rest — it may seem churlish to complain about having to mess with our clocks again. So let me refrain, lest I sound like a churl. (hh) 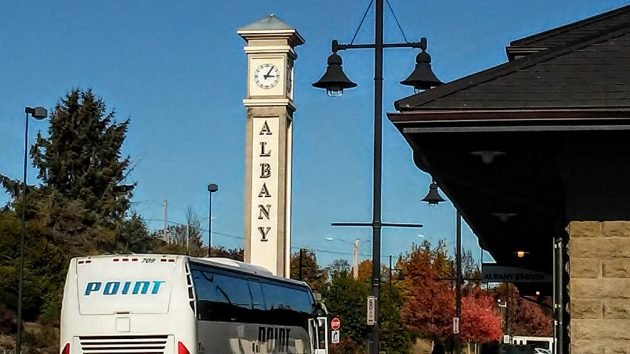 
3 responses to “Albany station clocks: The time is right”