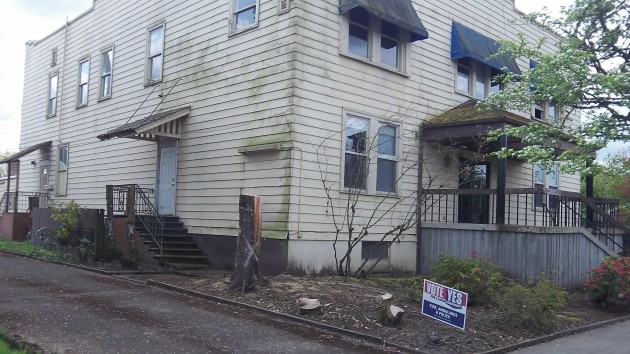 Trees have been cut and the inside of the Fortmiller building has been gutted.

Back on March 19, Albany’s downtown urban renewal board voted to support a project to renovate a tired old building on Third Avenue and build four townhouses next door. Since then the project has stalled because even though Albany wants more people to live and work downtown, city zoning and development codes say these townhouses-cum-offices can’t be built.

Developer Scott Lepman had proposed to renovate the former Fortmiller funeral parlor at 420 Third Avenue as offices and apartments. To make that idea pay, he also wanted to put up the townhouses on a narrow lot next door, with offices on the ground floor and residences above. Under the concept the advisory board of the Central Albany Revitalization Area (CARA) approved in March, CARA would have contributed $336,000 toward a project that Lepman estimated would cost more than $1.6 million.

But as it turns out, the city code says the required setback from the western lot line has to be 30 feet, which kills the notion of building anything on the 40-foot-wide property. As a result, demolition on the inside of the Fortmiller building has been finished but otherwise the project is at a standstill.

Even though buildings normally require no setbacks downtown, the code says otherwise when a building is next to a residential zone or use. It’s the residential use of a neighboring property that’s a stumbling block in this case. There are other hurdles and pitfalls embedded in the code. For example, according to Lepman, the space taken by code-required elevators plus staircases makes building on the narrow site impractical.

A few years ago, a mayor’s task force spent a year or so looking for potential code changes to try to encourage business and job creation, downtown and elsewhere. And while the council eventually enacted some minor amendments, significant hurdles evidently remain. That has to be cleared up. Otherwise downtown revitalization is not likely to succeed no matter how hard CARA tries to push it along. (hh)