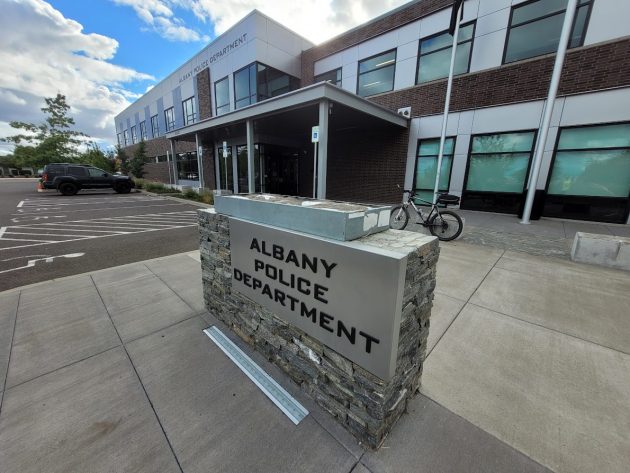 The Albany Police Department headquarters on the afternoon of Sept. 29, 2022.

The Albany City Council missed a chance last week to let people learn about the new contract between the city and the union representing most of the employees in the police department.

The council went into an executive session, closed to the public in person and watching online, for a briefing on the labor agreement the city had negotiated with the Albany Police Association, a contract the union had already unanimously approved.

The Oregon Public Meetings Law auhorizes closed-door meetings of governing bodies for several reasons, including “to conduct deliberations with persons designated by the governing body to carry on labor negotiations.”

During its 14-minute executive session at the end of its almost three-hour meeting on Sept. 28, the council heard a recap of the labor agreement from Human Resources Director Holly Roten. It then returned to open session and voted to ratify the deal.

The contract itself, of course, is not secret. Roten gave me a summary of what it says.

It’s a three-year contract ending on June 30, 2025, covering the full-time equivalent of about 86 employees, most of those working in the department.

In addition, the city will contribute 2 percent of wages in deferred compensation.

Under the new contract, an entry-level police officer with an associate’s degree makes $69,688 per year, up from $66,369 under the old one.

A police sergeant with a two-year degree and intermediate certification from the state police training agency will be paid $89,100, up from about $84,000.

Roten estimated the increased cost at about $3 million over the life of the three-year agreement. For the current two-year budget period, which runs through June 2023, the police department has budgeted about $17 million in wages and $13.2 million in benefits for a total of $30.2 million.

If people interested in city government had been able to watch the executive session, they would have heard Police Chief Marcia Harnden announce good news. The department, she told the council, was once again at full strength. (hh)