About Iran, Israel and us 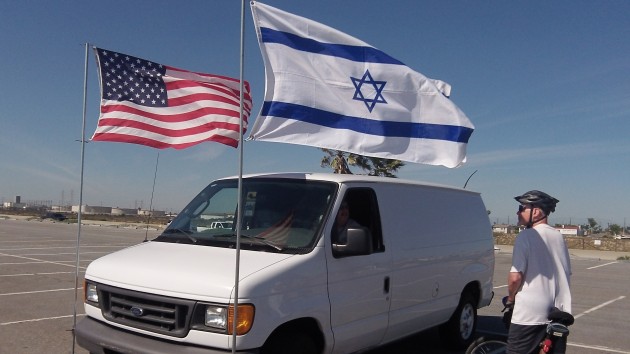 The owner of a van parked near a California beach last week makes a point with two flags.

There have always been tensions between the Obama administration and the Israeli government headed by Benjamin Netanyahu. Now their disagreement about Iran and other issues is even more acute, and the question is who’s right and who’s wrong. The answer should not be hard.

Obama is hoping that diplomacy and soothing talk can control and restrain the ayatollahs in charge of Iran in their apparent drive to develop nuclear weapons for the long-range rockets they already have. This week Obama broadcast an address to the Iranian people, sounding conciliatory.

So where does that leave the American public? Let’s consider who we’re dealing with.

On the one hand, we have a little country on the eastern Mediterranean with a market economy that holds regular free elections, a country that America has supported ever since it was created after the Second World War. Israel has just re-elected a prime minister who knows first-hand of the dangers his country faces. Netanyahu served in his country’s army, led a unit of special forces in combat missions and was wounded more than once. He also lost a brother, killed in the raid on Entebbe when Israeli commandos rescued more than 100 Israeli hostages.

On the other side, there’s an array of organizations and pseudo-governments such as Hamas and Hezbollah that refuse to recognize Israel’s right to exist and repeatedly announce they hope to destroy it and kill the Jews. Then there is Iran, governed by a regime that began by kidnapping American diplomats and seizing the U.S. embassy in Teheran in 1979. This is a regime run by people who support terrorism against Israel and frequently vow “death to America.”

For Americans up to and including the president and his administration, you’d think it would not be hard to decide which side to be on, whom to treat cordially as a friend and whom to oppose as an implacable foe. (hh)


9 responses to “About Iran, Israel and us”