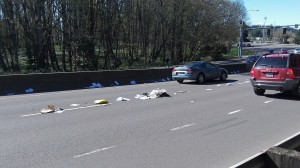 What you can’t hear me saying in this video, on account of the traffic noise and wind, is that if you lost a bag full of trash on the highway and you knew you had lost it, you would make an effort to stop and pick it up, right? That didn’t happen Tuesday afternoon on the north end of Albany’s Lyon Street Bridge.

Actually, there’s no way to stop a vehicle near where the trash bag must have fallen off, perhaps from the back of a pickup. And then there’s no reasonably safe way to retrieve the thing from the middle between the two lanes. Also, maybe the driver didn’t even know he had lost part of his load until he got to the dump. “Wasn’t there another one of these bags?” he asks, scratching his head. “Nah, I probably miscounted.”

I passed by the spot on Highway 20 just after 3 o’clock and saw how drivers were trying to avoid a blizzard of wind-blown papers. I turned back first chance I got, parked and walked back to the scene of the spill.

The papers flying all over all seemed related to vocational training. I recovered a one-page “sample performance test for forklift operators.” Another item was the final page of a contract between Carlson Testing Inc. and an unnamed client. A third was headed “Albany Weld-Trade School” and outlined a 10-week course totaling 320 hours, starting with “basic plate,” ending with “advanced pipe” in week 8 and culminating in two more weeks covering everything from OSHA and boom truck usage to “finding and keeping jobs.”

Some of the pages fluttering in the wind — and headed for the banks of the Willamette before I could grab them — appeared to be test papers. What position should your forks be in when going into, or pulling out from a pallet? “Parallel,” the test taker answered. I hope he or she got that right and by now has found a job. (hh)

My original version had this happening on Monday instead of Tuesday afternoon, when it actually happened. Can’t keep my weekdays straight since no longer having a firm work schedule. (hh)