A symbol of red tape and delay – Hasso Hering

A symbol of red tape and delay 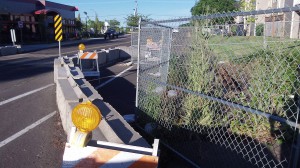 If America no longer — or just barely — works in some respects, a bridge on Albany’s Belmont Avenue may be a symbol of this decline. The problem is red tape strung up by state and federal agencies that are unaccountable for the delays they cause.

Belmont Avenue crosses a seasonal stream, but to call it a bridge is overstating the case. It was a matter of pavement on top of a couple of culverts. In January 2012, flooding collapsed the culverts and undermined the street. It took only two or three weeks for ingenious city engineers to borrow some bridge parts and reopen the street to let traffic through.

But as for permanent repairs? The stream may or may not occasionally hold fish of threatened species. So, a year and a half later, the city says it’s still waiting for permission to do the work. In June the city told the local paper it was working on permits with the Oregon Department of Fish and Wildlife, the U.S. Army Corps of Engineers, the Division of State Lands, the National Marine Fisheries Service and Native American tribes. Eventually, hearings may be held.

If this was still a can-do country, public works would have hired somebody to excavate the site, install a new culvert and repave the street two or three months after the damage was done. But in modern America, it’s no longer possible for problems to be so quickly solved. (hh)

From Rich Kellum:  We are regulating ourselves into oblivion. I hope I am reminded of that every time a “new rule” comes before the Council.  In a can-do country the repair would have been made the next week,  and the blacktop fixed the next summer. Sad.