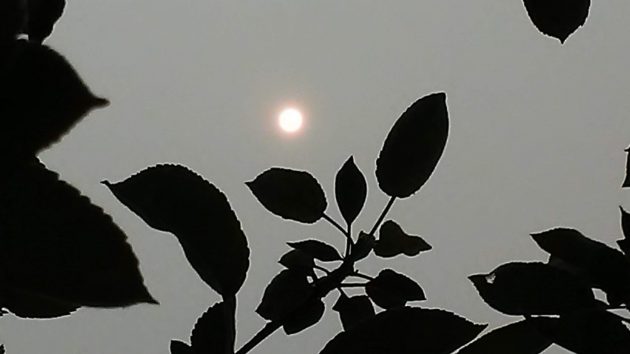 Seen through the foliage of an apple tree, the sun makes a gloomy appearance Sunday afternoon.

While we’re supposed to stay indoors to escape the Albany air made hazardous by wildfire smoke, let’s consider a question concerning the Oregon deaths caused by Covid-19.

In the daily reports on new cases and deaths, the Oregon Health Authority says many of the unfortunate people claimed by the novel coronavirus died at home.

A typical entry from Sunday’s report: “Oregon’s 506th COVID-19 death is a 96-year-old woman in Lane County who tested positive on Aug. 26 and died on Sept.12 at her residence. She had underlying conditions.”

The Health Authority reported five new deaths on Sunday. One of them died at a hospital, and the other four, three men and a woman, succumbed at home.

The ratio isn’t always that way. The day before, Saturday, only two of the six fatalities died at their residences, and the other four in hospitals.

But on another day, Sept. 9, when the death toll was eight, five were listed as having been at their residences at the end.

Does this mean people severely ill with Covid-19 are being sent home to die? That’s hard to believe. More likely, the people in these reports lived in nursing homes or other congregate arrangements where they could get professional care in their final days. So why not spell it out? Why this vague “at her residence”?

The Health Authority is committed to protecting people’s privacy. Good. But in the interest of not creating the wrong impression, and without doing any harm, they could be a little more clear. (hh)


14 responses to “A somber topic: Where corona victims die”