Why townhouse project may have to wait 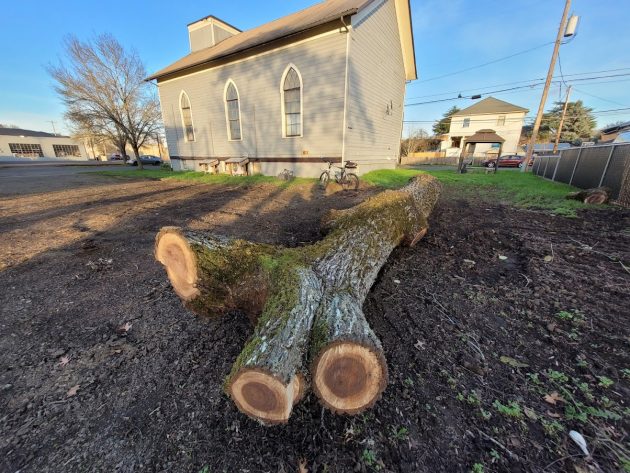 Blue sky on Dec. 3: That downed trunk of a black walnut will be put to use.

I’ve been following the fate of this black walnut since it figured in a land-use decision about new townhouses in downtown Albany last summer. Now the tree is down, but the wood won’t go to waste.

The tree, in the back of a vacant lot at 234 Third Ave. S.E., was cut down this week. On Friday I took the photo above, with Albany’s oldest still standing former church in the background.

A couple of days ago somebody on Facebook posted a photo of the tree cutters at work and quoted the Joni Mitchell song, “They paved paradise and put up a parking lot.”

But no, it wasn’t a paradise and it won’t be a parking lot. Instead, the Scott Lepman Company has the city’s approval of a site plan for eight three-story townhouses, each with its own one-car garage.

You can read the background here and in previous stories on this site.

Scott Lepman told me they plan to take the big chunk of a trunk to The Hardwood Centre on Highway 34, where it’s to be milled into slabs. Depending on the condition of the wood, they may turn some of it into a table for their new office. They’ve also been trying to contact a high school wood shop program to which to donate the lumber.

There’s some uncertainty about when construction of  the townhouses will start. Here’s why:

The Lepman construction crew is working on adding apartments in the basement of the Wood Apartments next door to the lot on Third.  That job has to be done first. (The Wood Apartments used to be known as the Labor Temple before the building was turned into apartments in an urban renewal project which the city eventually had to take over. Lepman bought it from the city in 2018.)

Now Lepman and his team also face the challenge of refurbishing and rebuilding the former St. Francis Hotel, which they took on this fall after another developer dropped out.

And they’re still working on completing the reconstruction of the Spruce Apartments, also known as the former Opera House, at 222 First Avenue.

Talk about a full plate. Which is why Lepman can’t say just when they’ll get to work on the new townhouses on Third. (hh)


4 responses to “Why townhouse project may have to wait”