Why Oregon cyclists have it pretty good 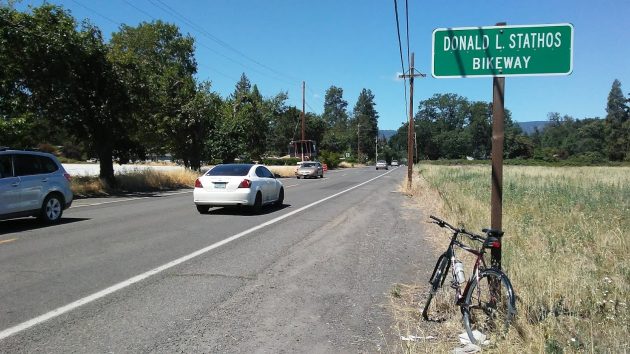 The sign says bikeway, but it’s just a narrow shoulder on West Main in Medford. (Photo from 2018)

Fifty years ago this week, the Oregon House passed HB 1700, the bike bill, whose chief sponsor was Don Stathos, a Republican from Jackson County and a resident of Jacksonville.

Al Densmore, of Medford, remembered the anniversary on Wednesday and called attention to it on Facebook. Densmore served in the House with Stathos and cosponsored the bill. He remembers that it passed the House 36-21.

I’ve written about Don Stathos half a dozen times since this blog started in 2012. As a newspaperman in Ashland, I knew him slightly during his two terms in the legislature, 1969 and ’71. The owner of an insurance agency in Medford, he was a World War II veteran who often rode his bicycle to the office. In 1979, his commuting route was named a bikeway in his honor.

A few times a year I’m on that road, West Main Street, and pass the signs. “Bikeway”? Outside the city limits there’s just a narrow shoulder. Jackson County should do something to improve that route to make it worthy of the Stathos name.

Stathos’ 1971 bill required state, county and city road authorities to spend money on bike and pedestrian paths whenever a road was built or reconstructed. The bill said to spend a reasonable amount but not less than 1 percent of the cost if the project was supported by the state highway fund. Road authorities could also save up the bikeway money in order to do a bigger project later on.

That’s the law still. This session there’s a bill to increase the required amount to 5 percent and add other requirements. The bill, SB 395, had a hearing on March 4 in the Joint Transportation Committee and has not moved since. It’s probably dead.

The current requirement is sufficient. In Albany anyway, adequate bike lanes have been provided whenever a major street is widened or rebuilt. And usually, the cost far exceeds 1 percent of the cost of a particular project.

Now there’s a new round of planning for bike and pedestrian facilities in the Albany area. More on that later. But around the mid-valley, cyclists have it pretty good as far as facilities are concerned. And the main reason is the bike bill we’ve had for 50 years. (hh) 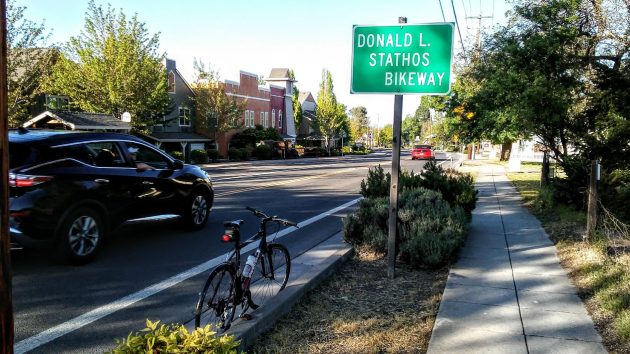 Inside Jacksonville, a wide lane serves as the Stathos Bikeway. (2019 photo)


7 responses to “Why Oregon cyclists have it pretty good”