Where bike path ends, solution in the works

Written May 2nd, 2022 by Hasso Hering
Comments: one response. 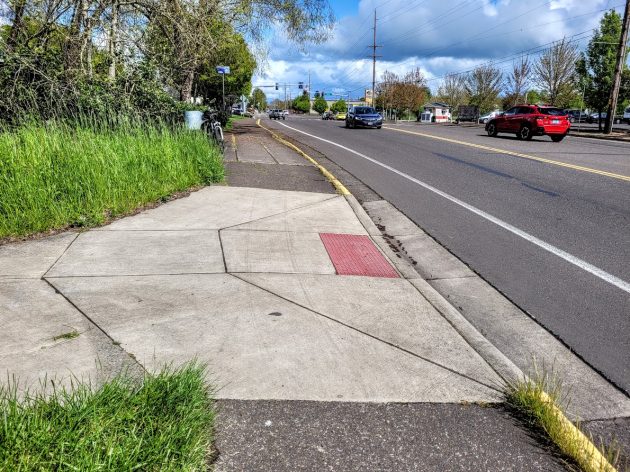 We’re looking east along Queen Avenue where the Periwinkle Bikepath dead-ends, on April 30.

If you ride your bike south on the Periwinkle Bikepath, you come to a dead end at Queen Avenue, where the path stops in the middle of the block. This may change soon.

The path continues on the other side of the Queen-Geary Street intersection some 300 feet away to the east. Getting there now, though, means either crossing traffic on three lanes of Queen where the path ends, or cycling east on the sidewalk, which is never recommended.

City engineers have designed a partial solution, and for the second time now Albany Public Works has called for bids to get it built.

The project, largely funded by an ODOT grant under the Safe Routes to School program, calls for building a 13-foot-wide, concrete multi-use path, 300 feet long, on the north side of Queen from the mouth of the bike path at Periwinkle Creek to the intersection at Geary.

Bids are due Tuesday, May 3. The project also calls for installing solar-powered “rectangular rapid flashing beacons” at crosswalks farther west on Queen, at Thurston and Main streets. The engineering estimate for the cost of the package is $275,000.

The first time this package was advertised, the project was bundled with two other jobs, and the city council rejected the bids as too high.

The new pathway along Queen is intended for walking as well as two-way bike traffic. It will take the place of the bike lane on the north side of Queen.

The traffic signals at Queen and Geary will be modified, according to the invitation for bids. Construction drawings also show new markings for shared used (“sharrows”) on the crosswalk on the north side of the intersection, connecting with the new multi-use path.

So, if a bid is accepted and a contract let for construction this summer, by this fall kids and adults on bikes should have an easier time connecting the north and south segments of the Periwinkle Path. (hh)


One response to “Where bike path ends, solution in the works”