What you can see looking down 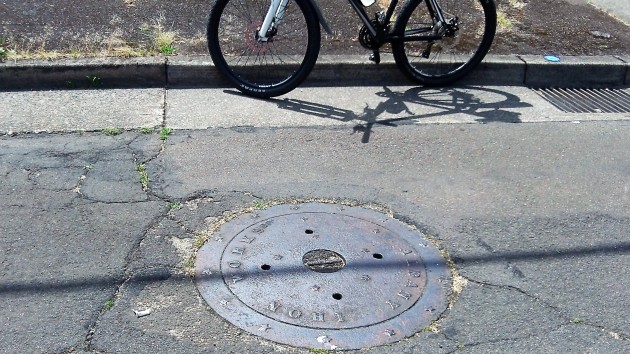 There’s local history under your feet, or your wheels in this case. And if you’re on a bike it’s easy to see by just looking down.

Living in Albany for many years, I had heard of the Albany Iron Works from time to time. The other day I’m riding down Railroad Street in the old industrial part of town when this manhole cover, glinting in the afternoon sun, caught my eye. It’s bigger than the ones in common use now, and from the size and the amount of wear I’d guess it’s probably close to a century old.

This one is in the block of Railroad between Second and Third. All together, I counted five of these apparent antiques in that street. It got me wondering about the company that made them.

It’s surprising what you can find rooting around online. There is, for instance, the secretary of state’s report to the 1913 legislature listing all the state’s expenses of the previous two years. Among them, on May 22, 1911,the state penitentiary paid Albany Iron Works for five separate orders of “castings” — iron bars perhaps? — on invoices ranging from $493 to $1,149 each.

Elsewhere the online scavenger learns that the factory was established in 1866 and that it continued in business until closing in 1950. It was based in the block between Water and First avenues east of Montgomery Street. For a time, the two-story brick building at 131 Montgomery N.E., the oldest surviving former industrial building in town, served as the Iron Works pattern shop. When the company started, steamboats coming up the Willamette delivered iron ore from mines at Oswego. (I’d never heard of iron mines in Oswego, but that’s what it says in a 1976 historical inventory.)

None of the works buildings remain. Today their memory is kept alive by the nomenclature of the Iron Works townhouses and office building as well as the Foundry Lofts apartments on the former industrial site.

Albany Iron Works made fittings for buildings all over Oregon. Few remain because many were removed and smelted for the arms industries during the two world wars. Not, however, those manhole covers. They’re an indestructible reminder of Albany as a thriving industrial center a century ago. And you can see them if, at the right time, you look down. (hh) 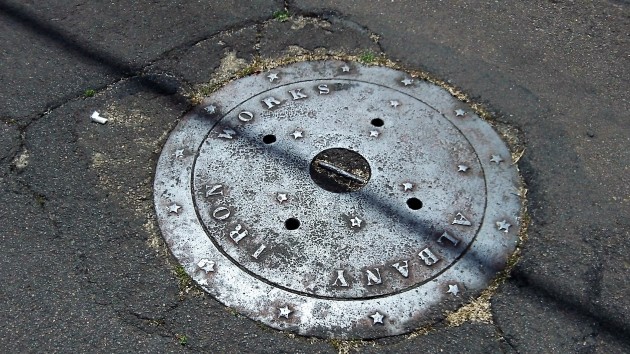 And here’s another look, complete with a carelessly discarded butt.


11 responses to “What you can see looking down”