Doug Hiddleson and some of his neighbors on S.W. Washington Street are fed up with the volume of the horn of Switch Engine 1501 of the Portland & Western Railroad, and they’ve turned to the city for help.

Hiddleson owns an automotive shop on the railroad side of the street, just south of the Queen Avenue crossing. On Monday he went before the Albany City Council to give notice that he and a neighboring business owner plan to appear before a regular council session to air their noise complaint.

He has talked to the railroad and others and the answer he usually gets is that train horns are a federal issue and there’s nothing that can be done. He wants the railroad and the employees operating the switch engine in the Albany yard to consider that they’re working in a neighborhood where people live and work.

Locomotive drivers are required to sound their warning horns before entering a crossing. Hiddleson has no problem with that. It’s the volume and length of the warning blasts all hours of the day and night he worries about. He recorded one ear-shattering blast that lasted 13 seconds and played it for the council Monday. Union Pacific and Albany & Eastern freights and Amtrak trains sound their horns at the crossing too, but Hiddleson says not nearly as loud or as long.

Councilman Alex Johnson II was aware of the problem. He said he was in a nearby business and could not talk on the phone when the switch engine’s air horn went off.

Mayor Sharon Konopa asked Hiddleson to send her his video recording, and the city will see if anything can be done. Councilman Bill Coburn looked up the regulations on train horn volume and cited allowed decibel levels. He doesn’t buy the idea that it’s federal and nothing can be done. At the railroad, he said, “there’s gotta be a guy we can talk to.”

The Federal Railroad Administration says train horns must between 96 and 110 decibels loud 100 feet in front of the train. The standard warning at grade crossings is two long blasts, followed by one short and another long one. Hiddleson’s next step is to find somebody with a decibel meter to document the level of sound.

On Tuesday afternoon I spent 20 minutes at the crossing, listening to the switcher sound its horn a few times. I talked with Hiddleson at his shop and also with a woman watching over children who were playing in the driveway of an apartment across the street. The sound level that afternoon, she told me, was not as loud as it sometimes has been, but it still wakes the kids when they’re trying to take a nap. (hh) 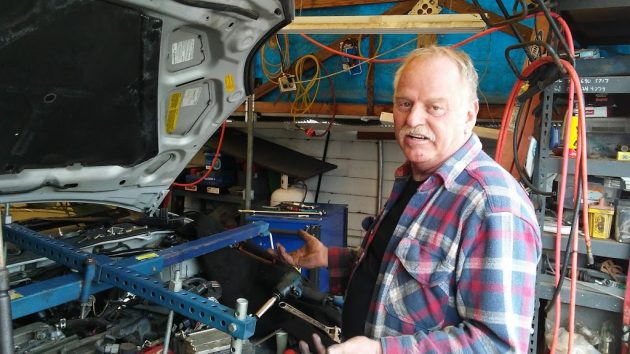 Doug Hiddleson at work in his shop near the tracks on Tuesday afternoon.