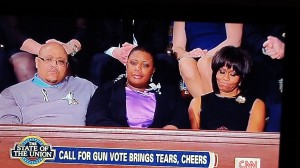 Hadiya’s parents with the first lady during the State of the Union Speech.

President Obama exploited the victims of gun violence and their families during his State of the Union Speech when he referred to them and repeatedly said they “deserve a vote.” What they actually deserved was some respect in their grief, instead of being turned into props for a cynical argument in favor of a bad policy on national TV. But presumably they volunteered for their appearances, so it’s hard to put the blame entirely on the producers of the Obama speech.

Sitting with the president’s wife were the parents of Hadiya Pendleton, 15, an honor student who was gunned down and killed in Chicago, just days after peforming with her classmates at the Obama inauguration. The president implied that her death supports his demand for a ban on certain ammunition magazines and rifles as well as a more thorough system of background checks before anyone can buy a gun. But those policies have not even a remote bearing on Hadiya’s fate.

Two young gangbangers, 18 and 20 years old, have been charged in her killing. The Chicago police said the 18-year-old shot into a crowd of teenagers because he mistook them for members of a rival gang. The older guy drove the get-away car. The shooter used a handgun, not an assault rifle. Based on the number of charges, he fired four or five shots, for which no big magazine is required. He could not have gotten the gun legally, especially in Chicago, because in 2011 he was arrested on a gun charge and got probation.

Chicago has really tough gun laws and yet homicides there in 2011 topped 500 for the first time in years. Clearly gun laws don’t slow down murderers and gang members so lacking in a conscience that they would shoot into a crowd of strangers.

On Tuesday, Hadiya’s parents stood up and applauded Obama’s gun proposals even though they would have made no difference in protecting their child. Instead, they should have been protesting the culture that fosters 500 murders in a year in their home town, and a politician’s shameless exploitation of their grief. (hh)

From Dave Fox: The family got what they wanted, to be seen with the first lady.

From: Ted Salmons: Obama never misses the opportunity to use grieving people as photo props to push his as yet non-working agenda.

From Steve A. Brown (via Facebook): All in how you see it. I didn’t see exploitation at all. I also don’t believe they felt exploited. You’re wrong on this one.
Posted in: Commentary
Tags: gun control, Hadiya, Obama, State of the Union