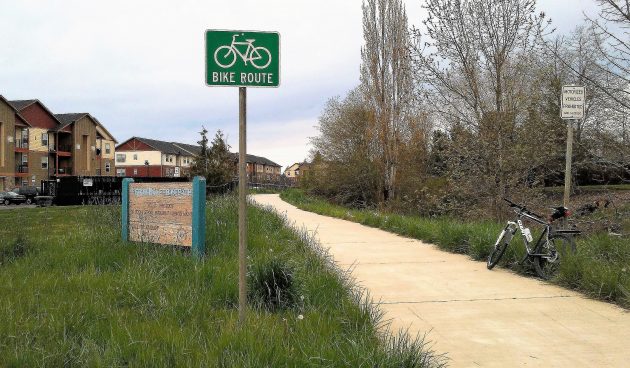 The Periwinkle Bikepath near Queen Avenue. More than 40 years ago, OSU students had a hand in bringing it about.

It was in 1973 that that a group of seniors at Oregon State University had an assignment of designing bikeways for the city of Albany, and the Periwinkle Bikepath was the result. Now another group of students, from the University of Oregon this time, has taken on a similar challenge. It may be too much to expect a similar result.

In a letter to the editor of the Albany Democrat-Herald in 2008, Tom Uppstad recalled the Periwinkle work he and his fellow OSU seniors did in the 1970s . “The goal was to provide an alternative route to travel with minimal competition with motor vehicles,” he wrote. And with a couple of exceptions — at Queen and 21st avenues — the 1.7-mile Periwinkle bike route manages to do so, even though it falls short of the original goal, which was to run from South Albany all the way to the Willamette River.

Now, U of O students are taking a look at another waterway, the Santiam Canal as it flows through Albany. They are taking a course titled “Topics in Bicycle Transportation” taught by Marc Schlossberg, professor of planning and co-director of the university’s Sustainable Cities Initiative. As part of that initiative, several classes and faculty members have been studying Albany issues identified for them by the city staff.

The students tackling the bike project are in a class on the planning of “canal multi-use paths.” Last week they met in Albany and took a look at what was what. They’re supposed to “analyze previous plans and assess constraints and barriers to development around the Albany-Santiam Canal… Recommendations could include next steps for development, recommendations for project phasing, and project design details.”

A tall order, that. Especially considering those “constraints,” which include long-standing objections to any recreational development along the path from Public Works and, probably, property owners along the way.

The Town Center Plan that emerged from the Central Albany Land Use and Transportation Study in the 1990s recommended that walking paths be developed along the Santiam Canal, but it has not been done. And as a bikeway such a path would be impractical because cyclists would have to stop for cross streets on every block.

The Periwinkle path planners had no such problems. The route along the channelized creek was open and uninterrupted, as much of it remains today. (hh)