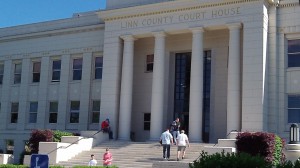 The sleep-driving case is scheduled for trial at the Linn County Courthouse.

After delays lasting more than a year, Mandy Kenney is scheduled to go on trial June 11 in a case that should never have been brought. But now she may benefit from a new decision by the Oregon Supreme Court.

On a February night in 2012, this young mother of three from Turner took some medication prescribed for her by her doctor and went to bed. A few hours later, she found herself on a Linn County roadside next to her car in a ditch. A sheriff’s deputy took her in on suspicion of being under the influence. Her blood test showed zero alcohol but traces of Ambien, the sleeping aid she had taken. Later she learned, and her doctor said in a letter, that she evidently had suffered a well documented side effect of that medication –“sleep driving.”

The state refused to drop the two charges, DUII and reckless driving. And Kenney refused to plead guilty in return for diversion. But now, on May 31, the Oregon Supreme Court threw out the DUII conviction of a Portland man who claimed he was “sleep driving” when he got behind the wheel with 0.15 percent blood alcohol.

The court cited an Oregon law that a person must commit a “voluntary act” to be convicted of a crime. This new ruling should help Mandy Kenney, who has proved she was not drunk at all, put an end to her long and needless Linn County case. (hh)

Gordon L. Shadle responded on June 3: If people can sleep-walk and sleep-eat, it seems reasonable that they can sleep-drive. The trick is to convince a judge or jury that you were acting involuntarily. In the Portland case the Circuit Court judge screwed up by not allowing the defendant to present a sleep-driving defense.