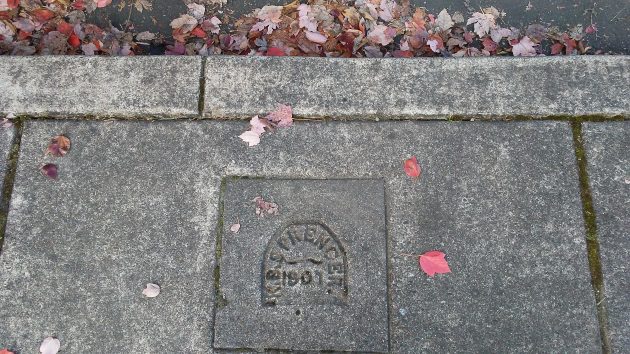 This impression in the sidewalk sent me on a chase for references to the name.

On a rainy day before a holiday with not much going on, I remembered a name I had seen on an Albany sidewalk, and I wondered who that was.

It was on First Avenue in front of John Boock’s art park at Lyon Street that I looked down instead of straight ahead. And there, I noticed a name and a date pressed into the concrete. I doubt that First Avenue had concrete sidewalks in 1907, so I’m either misreading the year, or 1907 signifies something other than the year it was imprinted in the cement.

The name, Sprenger, is that of a large family in the mid-valley. At first I thought the first initial might have been an N. And if so, perhaps the inscription referred to Nicholas B. Sprenger. A website devoted to historical Oregon cemeteries says that N.B. is buried at the Masonic Cemetery at Seventh Avenue and Broadway Street. He was born in 1845 in Albersweiler, Germany, came to Oregon as a boy in 1852, settled (presumably with his family) just north of Shedd, and died in 1921.

Albersweiler is a village in the southwestern German state of Rhineland-Palatinate. When Nicholas was born, it was part of Bavaria. About that time, timber resources in the surrounding mountains had been depleted and the population was growing, and a lot of people in the region left for the New World as a result. That may explain young Sprenger’s arrival in America.

Some of this stuff has to be taken with caution. In 1938, Thomas Bird Sprenger told a WPA interviewer that he was born in Ohio in 1851 and that he was the son of Nicholas Sprenger of Albersweiler. Since Nicholas is unlikely to have become a father at age 6, something about these dates is not right.

In February 1873, however, the Benton Democrat reported that the “fine residence of J.B. Sprenger, of Albany, was almost totally consumed by fire” on the previous Monday. The paper added that the home had been occupied by N.B. Sprenger and had been advertised for sale, “under a mortgage to the school fund.” Whatever that means.

But on closer inspection, the first initial could be a K. So I went looking for K.B. Sprenger in the vastness of the cyberworld. And, thanks to the archivists at the University of Oregon, there’s another newspaper page, this one from the State Rights Democrat in Albany of Sept. 19, 1879. It reports that on Monday, “D.B. Monteith and K.B. Sprenger got in from Alder Creek, on the Santiam. Sprenger killed 16 deer and Monteith 9, and they also caught all the trout.”

As you can tell, I’m no closer to knowing exactly whose name is in that sidewalk, or when it was put there, or why. If anybody knows, I would be grateful for a response. After all, what’s the point of immortalizing someone in concrete if passersby can’t tell who it is. (hh)

But on Jan. 16, 2018, I heard from a former colleague in the newsroom at the Albany Democrat-Herald, Jessica Coudare, who wrote she had just stumbled across this story from 2016. Here’s what she emailed:

You actually have a fairly good source about this subject that you didn’t consult — me. You may remember my maiden name is Sprenger.

I’ll have to ask my folks about the impression in the concrete, as I don’t remember what we know about it. There is this tidbit from the Portrait and Biographical Record of the Willamette Valley – Nicholas Sprenger was one of the organizers of the first Masonic Lodge in Linn county.

I can, however, clear up a few things for you. There is a Nicholas B. Sprenger buried in the Masonic cemetery, but it is not father Nicholas. Father Nicholas, and his wife Maria, is buried in Crystal Lake Cemetery in Corvallis. Father Nicholas was born in Albersweiler, but in 1802. The Nicholas B. Sprenger buried in the Masonic is his son,  who was born in 1845 in McConnelsville, Ohio. The family made the trek to Oregon in 1852, when my great-great grandfather (the man in the 1938 WPA interview) was just a few months old.

J.B. Sprenger was another son of father Nicholas. I believe it to be the son Nicholas who was living in the house at the time of the fire.

To my knowledge there are no K.B. Sprenger’s. I actually just checked and the Albany Democrat lists that it was N.B. Sprenger that had gone hunting with D.B. Monteith.

Hope this helps some.

And then, a little later, again from Jessica, this:

I believe this is probably the answer to the name in the sidewalk. This is about the Nicholas buried in the Masonic cemetery.

Nicholas was a plasterer and cement worker by trade.  (“I remember the beautiful “plaster of paris medallions” he had made for the ceiling of the sitting-room parlor of his own home, and for Uncle Tom’s – much in vogue in the Victorian period, and being shown again today” – comment by MLL) The cement sidewalks around the old Linn County Court House in Albany were laid by Nicholas B. He was widely known in and about Albany as a reliable and skilled workman, and his services were much in demand.

Nicholas B. was an active member of the Albany Elks Lodge. He served as their cook and regularly prepared dinner for the lodge, which was his hobby.

Rebecca Bond commented that the Elks lodge stood on that corner until it burned down. I would say chances are better than average that he laid the cement for them…

I’m sorry, I forgot to cite my source for the information about him being a plasterer and cement worker. The information came from a family biography that was put together by Merle Lamar (a great-niece of Nicholas) for a family gathering in the 80s.