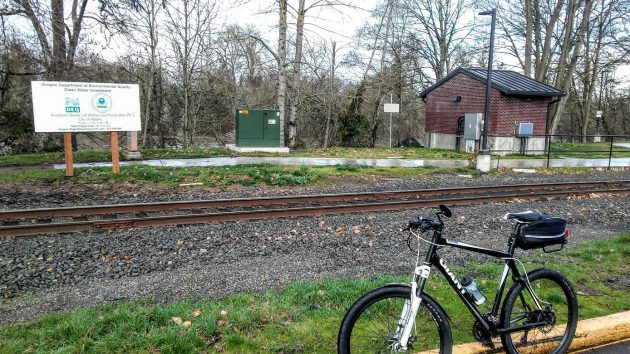 Where the lift station station was installed, across the track on the Dave Clark Riverfront Path.

In case you missed it, unlikely as that is, last weekend we had our first episode of heavy rain this winter. And guess what: Albany’s Riverfront Interceptor, a big sewer main that drains most of the central part of town, did NOT overflow.

It didn’t overflow because contractors for the city last year completed a two-phase project to build a new pipeline to handle the extra load from wet weather and also fix the old one, an effort for which the city got a $13 million loan from the state.

Whenever there was a deluge in past winters, the city would post signs warning people to stay away from the river because of sewer overflows. After this weekend, I noticed the signs were not unfolded this time. They weren’t needed, I assumed, because the new wet-weather lift station and force main built over the last two years were doing their jobs.

“Yes,” public works operations chief Chris Bailey told me when I asked, “last weekend was the first real test of the new wet weather lift station and force main. All in all, it was very successful. The programming and control worked as designed and the lift station was activated several times as flow in the upstream interceptor increased. ”

Her email in response to my inquiry continued: “We don’t have all of the data analyzed yet but as you concluded, we feel certain the facility prevented a sewer overflow that in previous years would probably have happened. There are a few minor things we feel we can work on to make it perform a little better, but overall it was a great success.”

Because I’m a nut for public works, I’ve run lots of stories about this project over the years. One of them is here, if you want the background. So I’m glad this Albany venture has reached its happy end. (hh) 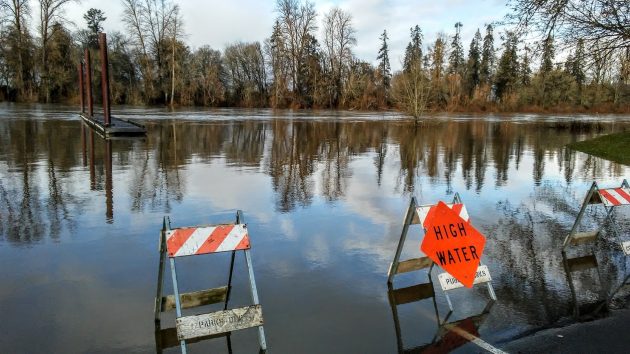 The Willamette at Bowman Park on Dec. 22: High water contained no overflow from the Riverfront Interceptor.


One response to “Sewer project has first real test: It works!”