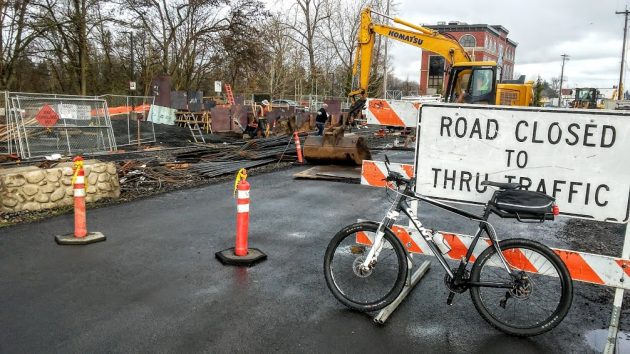 At the corner of Water Avenue and Montgomery on the afternoon of Dec. 13.

Residents and commuters along the Albany riverfront will have to put up with construction and detours for a while longer than originally planned.

The contractor, Pacific Excavation, is building a sewer pump or lift station and a new main along Water Avenue under a $7.2 million city contract. The work started in July, and the original contract called for the job to be finished by Jan. 31, 2020.

Water Avenue is on one of my bike routes, and I’ve been watching the project progress. The pipeline deep under ground along Water Avenue was laid pretty quickly, it seemed to me. But to my unpracticed eyes, it didn’t look like they could wrap things up at the lift station in the month and a half that remains. So I asked.

Turns out that the city now expects the lift station, off Water Avenue near the corner of Montgomery Street, to be finished in the spring. The start of construction had been delayed because of paperwork involving a subcontractor and the Department of Environmental Quality, according to Chris Cerklewski, the engineer in Albany Public Works who is overseeing the work.

“But once those issues were sorted out,” Cerklewski said in an email, “the construction has progressed according to plan. The lift station is now anticipated to be ready to put into service by April 2020.”

He added that the contractor’s crews were “still on schedule based on when they were actually able to start work.”

The lift station is being built largely underground right next to the Portland & Western track. On Friday, workers using an excavator were working in a deep trench directly underneath the rails.

No doubt nearby residents will welcome the day when all this complicated work is done and they once again have unfettered access to their homes. Commuters look forward to the day the detours in the work areas will end. (hh)


One response to “Riverfront construction takes a little longer”