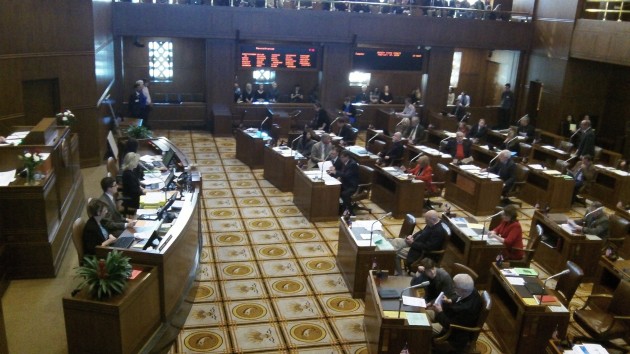 The Oregon Senate before Tuesday’s vote on low carbon fuel.

Democrats in the state Senate on Tuesday rammed through a program to make fuel more expensive and less useful. You’d think that they would have more regard for the people of this state. Instead, they showed they are looking out for the fat cats who speculate and invest in alternative fuels.

The vote to extend the so-called low-carbon fuels program was 17 Democrats in favor and 12 Republicans and the lone sensible Democrat in the Senate, Betsy Johnson of Scapoose, against. The bill would require reducing the carbon content of fuel 10 percent below the level of 2010 by the year 2025.

Just about all the lobbyists for people who work for a living — from Oregon truckers to small business — asked the Senate not to do this. Based on studies, it’s estimated that if this program works at all, it will increase the price of fuel between 19 cents and $1.18 a gallon. (It may not work at all because, for instance, alternative fuels may not be available in sudficient quantities to meet the standard or, for another instance, the truckers say engine waranties lapse when diesel has more than 5 percent biofuel.)

With 10 percent less carbon, mileage in most vehicles likely will go down 10 percent, so the result in terms of emissions is exactly zero even while people have to pay more.

Oregonians burn about 1.5 billion gallons of fuel per year. The estimated added expense amounts to $90 million to $285 million. This cash will flow to alternative energy investors and brokers of carbon credits, not into the highway fund, so it won’t do Oregon drivers a bit of good.

Why would otherwise sane politicians vote for something as stupid as this? Because they are in the thrall of the climate lobby. But the program has nothing to do with saving the Earth. Oregon contributes roughly one-tenth of 1 percent of global carbon emissions, and transportation accounts for only one-third of that. So even if carbon in the atmosphere actually changed the world’s climate for the worse, Oregon’s action would have zero effect on preventing that change.

Maybe Democrats in the House will have better sense. But as hopes go, that one is slim. (hh)