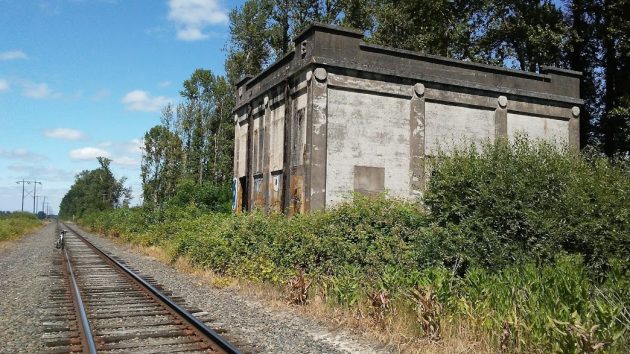 It was three years ago, in April 2015, that I wrote about the former Pirtle power transfer station on the old Oregon Electric Railway. Last week I looked at it again and, no surprise, it and the graffiti are still there.

Actually, the old graffiti may have been replaced by new ones. So even though this relic of our railroad history has been abandoned by everybody else, spray-paint vandals keep coming back. Or new ones come and use it as their canvas for the first time.

This concrete box was constructed to house generating equipment to power a section of the electric railroad that was built from Portland to Salem in 1907-8 and reached Albany and Eugene in 1912. The line ended passenger service in 1932 and electric freight service in 1945. Now, the track in the mid-valley is owned by BNSF and leased to the Portland & Western Railroad.

Neither BNSF, successor to the Burlington Northern, nor the Portland & Western have shown any interest in demolishing this massive structure by the side of the track south of Albany, or in taking steps to secure and preserve it.

To get there from Pirtle Drive, you hike (or push your bike as I did) south along the track. You can’t get lost because you can see the building from the road, 656 feet or 200 meters away (according to the measurement on Google Maps.)

Looking at a map of tax lots, though, I noticed a strip of land 50 feet wide leading from the railroad right of way due east through farm fields to Oakville Road.  The strip, it turned out, was designated for a road in the “Pirtle Home Tracts Plat No. 3,” a subdivision of 24 home sites recorded in 1913 by Grant Pirtle and Charles H. Wieder, the president and secretary, respectively, of the Pirtle-Wieder Co.

I discovered these details with the help of the Linn County Assessor’s Office. There, the plat is still on file. It says among other things that “the roadways as shown on this plat are hereby conveyed, set apart and dedicated to the Public to be used by the Public perpetually as roadways…”

There’s no actual road there, obviously, and today’s land-use laws would never allow 24 home sites in that area. But I wonder what would happen if someone tried to reach the Pirtle station via that “perpetually public” right of way from Oakville Road. Not that anyway would want to. Its easier to hike the short distance from Pirtle Drive. (hh) 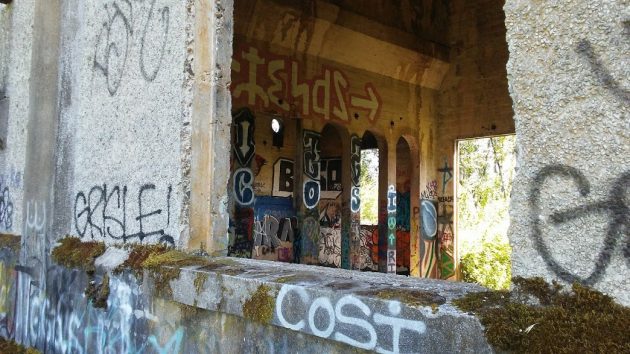 Spray paint inside and out: Old station shows the signs of continued vandalism.


9 responses to “Revisiting Pirtle: A station in rail history”