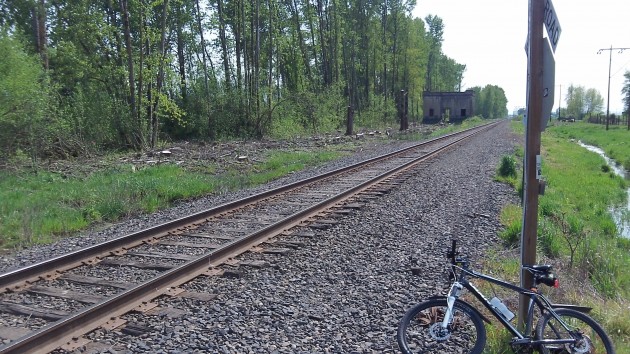 You can see Pirtle Station, though not the vandalism, from Pirtle Drive.

The Pirtle transfer station of the old Oregon Electric Railway used to be half-hidden by tall trees. Now the trees — cottonwoods, I think — have been mostly cut down, and this concrete relic of our railroad history stands out there in plain view about 150 yards south of Pirtle Drive.

It’s not as though graffiti vandals had not known the place was there before. They’ve been defacing the walls and piling trash on the floor for many years, decades probably.

A hundred years ago the building housed generating equipment to send power into the OE’s overhead lines, but only the concrete walls, floor and roof remain. 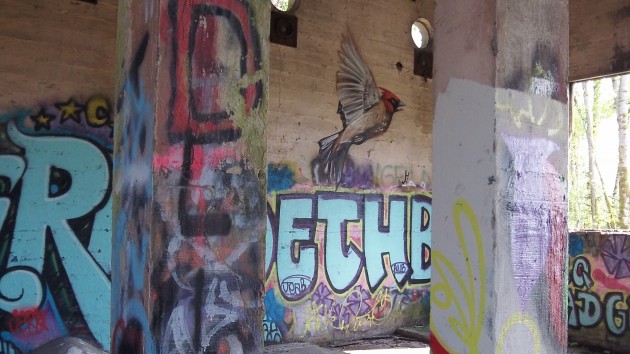 What you see when you get close … 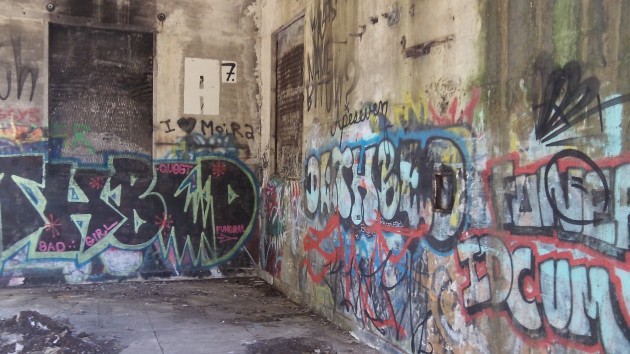 The Oregon Electric opened its line from Portland to Salem in 1907. Five years later, when it extended the track through Albany to Eugene in 1912, it tried to cut costs by powering the wires at 1,200 instead of 600 volts. Doubling the voltage enabled the company to space transfer stations including Pirtle 18-20 miles rather than 12 miles apart.

Somewhere south of  Pirtle (named for land owner Grant Pirtle, according to Oregon Geographic Names), at a point called Gray, the OE built a spur to Corvallis, ending at the Linn County side of the Van Buren Avenue bridge. Later, when passenger service died, the railroad abandoned the spur and dug up the track. On the main Oregon Electric line too, business went from bad to worse. Crew members often outnumbered passengers, and by 1932, there was only one train a day to Eugene. Passenger service ended on May 13 that year.

(I got all this from The Transfer, the newsletter of the Oregon Electric Railway Historical Society, and a 1979 publication put out by the Horner Museum in Corvallis.) 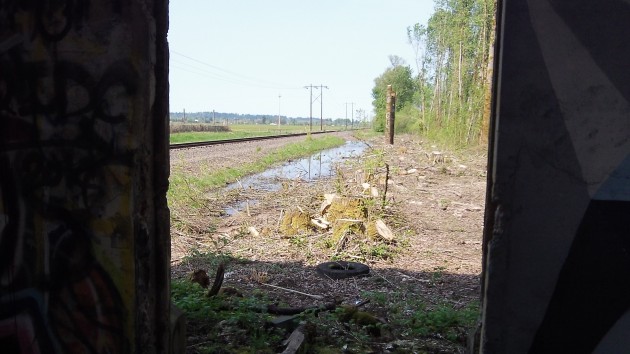 There used to be tall trees in this view toward Pirtle Drive.

What puzzles me now is the logging that exposed the Pirtle station to full view from Pirtle Drive. I guess the trees were cut to keep them from falling across the tracks and disrupting the Portland & Western’s freight operations. But why leave four bare trunks, two each both north and south of the station?

It would be nice for somebody to take an interest in this wreck of a power station and clean it up, though it’s hard to see to what possible use the structure could be put. It’s not, as far as I can tell, on any public right of way. To get there, you have to trespass on the railroad tracks or other private land.

Still, it’s an object of interest. The building is at least 103 years old and if nobody tears it down, it might last 500 more. (hh)