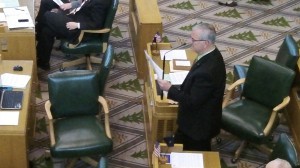 Here’s a bit of news from the political front. In an email on another subject, I asked Rep. Andy Olson, R-Albany: “And by the way, are you going for another term in the House in ’14 or do you have other plans?” His answer a few days later, on Sept. 22: “I do plan to file for the 2014 election. If you can believe it, this is the sixth time…”

The phrasing suggests he will indeed seek re-election to the House rather than trying for some other office next year. Olson, who retired as a lieutenant from the Oregon State Police, was elected to the House from District 15 the first time in 2004. By now he has served in five legislative assemblies and briefly, during the interim period before the 2013 session, was the Republican leader in the House.

During the interim and then the 2013 session he worked in a committee on a program to revise criminal sentences to save prison money without jeopardizing public safety, and the legislature did take steps along that line.]

No word yet on any potential Democratic challengers in District 15.

As for other offices, Rep. Sara Gelser, a Corvallis Democrat, has announced for the Senate in District 8, which includes both Albany and Corvallis. Sen. Betsy Close, R-Albany, appointed to the seat after the resignation of Frank Morse in 2012, was to announce her plans any time now.

(Update: Senator Close appears to be preparing to run next year and said Tuesday she will announce her plans on Oct. 17.)

At issue: Can Republicans hold the 14 seats they have or become a smaller and less influential minority in the 30-member Senate? Or put another way: Can Democrats gain another seat or two so they can push through measures on gun control, which they could not do this year? (hh)

Ray Kopczynski:  I definitely hope Andy follows through.  His abilities far outweigh any issues vis-à-vis “term limits” as the recent D-H blog thread suggests. I don’t agree with 100% of his positions – no one should — but overall, he’s done a great job for all of us. I’ll support him again wholeheartedly!

Warren Beeson:  Thank you Andy, for your past outstanding service and for running again.