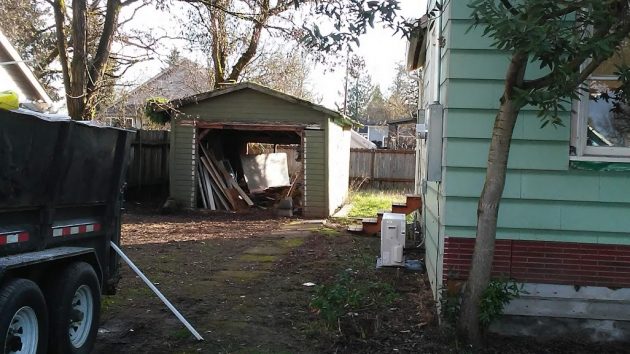 The shed you see here may be leveled and replaced with a 528-square-foot garage, the Albany Landmarks Advisory Commission voted Wednesday. But it took two public hearings and a month’s delay to reach that conclusion.

Why all this red tape for knocking down an old shed? Because the property, 626 Third Ave. S.E., lies in Albany’s Hackleman Historic District, where city law obligates owners to get Landmarks’ approval of new structures. And because at the first hearing on Dec. 5, Albany resident Camron Settlemier contended that the shed, like the house it sits behind, should be considered a “contributing historic” landmark, so the owner would need approval for its demolition before the replacement garage could be allowed.

The city planning staff disagreed, saying that accessory structures like this had never before been considered historic. And while a 1980s survey of historic structures in Albany mentioned the outbuilding as well as listing the house, it didn’t actually evaluate the shed for its style or contribution to Albany history.

Still, the landmarks board wanted clarification and put off the decision until Wednesday. A couple members who had argued for the delay were absent Wednesday.  And the four commissioners present — David Abarr, Cathy LeSuer, Larry Preston and chairman Bill Ryals, voted to let the new garage be built on the site of the old one.

Preston, who had recused himself a month ago but joined the discussion Wednesday, said there was nothing historic about this shed and he saw no problem with the proposal before the board.

Gary Hodgson, of Renu Development, is working on the property. He told the landmarks board in December the outbuilding was in “terrible shape and falling down.” The property is under contract to be sold, and the new owner wanted a new garage. It will be made to look similar to like structures in the neighborhood.

As in this case, the landmarks board sometimes gets caught in fights over whether to save or demolish old structures. Last fall it refused to allow immediate demolition of three old houses at Fourth and Calapooia Street. The city council partially overturned the board, but an opponent appealed that decision to the state Land Use Board of Appeals, where it remains.

Now that the state wants more accessory dwellings in single-family areas, a mandate Albany is still trying to accommodate with a local code change, Bill Ryals of Landmarks is proposing that Albany find new ways to achieve more housing and save historic buildings at the same time.

He mentioned one approach Wednesday: If single-family properties in the historic districts have outbuildings that are truly historic, add their square footage to whatever maximum size Albany allows for accessory dwellings. This would turn the outbuildings into economic assets that owners would want to preserve and adapt rather than raze to make room for additional housing.

There was talk Wednesday about arranging for a meeting to flesh out that and related issues. It may sound boring, but the outcome may determine what happens to Albany’s historic districts in the long run as pressure builds to provide more housing, old dwellings deteriorate, and the costs of historic restoration soar way beyond what new construction costs. (hh) 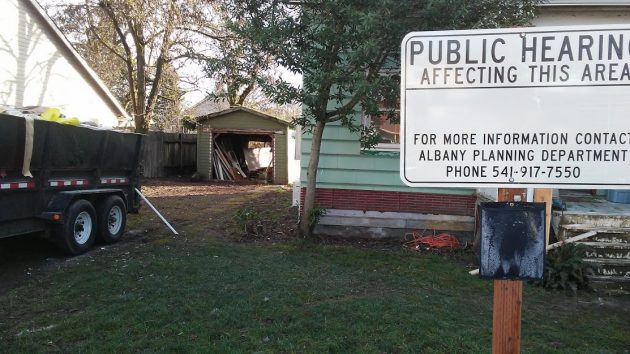 A wider view of the property that was the subject of a hearing in December. The hearing was continued Wednesday.


6 responses to “Red tape unwound: The shed can go”