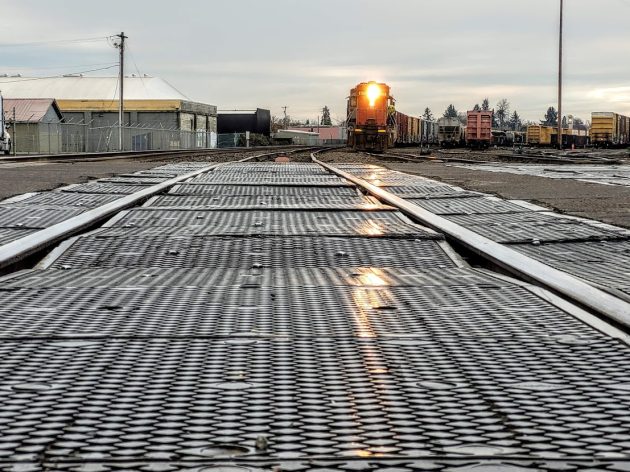 One of the four railroad tracks at the Queen Avenue crossing on Nov. 22, 2021.

When it comes to fixing the Queen Avenue railroad crossing in Albany, the motto seems to be: What’s another year or two?

Only last month there was a story on this site, based on what a city advisory panel was told, that reconstruction of the extremely bumpy crossing  would not happen in 2022 as the most recent plan had foreseen. Instead it might happen in 2023.

But then, city transportation systems analyst Ron Irish heard from the manager of ODOT’s part of the project.

ODOT has been working for years on plans for changing the crossing arms and layout in the interest of increasing safety. The state agency is coordinating those plans with the Union Pacific Railroad, which apparently intends to reconstruct the crossing over four tracks in order to make driving across them smoother.

The word Irish got from ODOT’s project manager on Dec. 1 was that “the roadway designer and the railroad consultant have been working through the crossing design and are nearly complete with a new layout that should meet the railroad’s requirements.”

Toward the end of January 2022, the people involved plan to meet to go over the design and get the project moving again. Then, the schedule will be updated to reflect the changes.

“We are planning on construction happening in 2024,” said the ODOT note.

If that actually happens — and experience says it’s a big if — it will have been eight years since ODOT presented its plans to the Albany City Council.

That was in 2016. The following year, 2017, the state Transportation Commission added the $1.3 million ODOT crossing project to the State Transportation Improvement Plan. In 2019, the word was that the work might be done in 2022. Now the target year is 2024.

One gets the feeling that with this railroad and this highway department, the job of making plans is the main thing, more important than carrying them out. (hh)


8 responses to “Queen Avenue crossing: A saga without end”