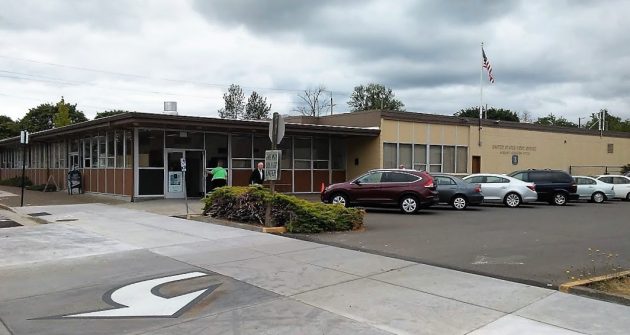 The Albany Post Office on Monday afternoon. A city committee keeps talking of getting it to move.

Albany Mayor Sharon Konopa’s work group on moving the post office and an old city-owned church building kept plugging away Monday but got no closer to the main question: Under what circumstances would the post office even consider relocating to another site?

The group seemed to accept a suggestion by Rich Catlin, one of its members, to find out how Portland went about relocating a post office. So far the Albany group has not approached the Postal Service about the relocation idea.

On Monday the group got information about two sites members are considering for the post office, the long-vacant former Safeway store at Pacific and Calapooia Street, and mostly vacant land bordered by Pacific, Madison and Seventh.

Owners of the old Safeway would lease it to the post office for $10,000 a month. If they had to spend money on remodeling first, the lease fee would be more.

At the other site, in two ownerships, somebody would have to build a post office, which real estate agent Gary Brown said would probably cost $4-4.5 million. One of the owners is willing to sell, but the other would insist on leasing the land.

The Postal Service owns its Albany building. Newly appointed Postmaster Pamela Moody said last month the decision would be up to somebody higher up, but she couldn’t see why the office would want to start making lease payments again.

The panel’s other issue is moving the old Cumberland Presbyterian Church at Main Street and Santiam Road. Moving it to city-owned land next to the Albany Skatepark, as the panel wants, would cost about $60,000, not counting a foundation to put it on, according to quotes from two companies that move buildings.

Parks Director Ed Hodney volunteered to get started on the staff work to figure out how the building would be used at the new site, what would be around it, and how much all this would cost. Somebody mentioned the total would be $200,000 to $300,000.

The idea seems to be that public funds, probably urban renewal money from CARA, would pay for the move, followed by a drive for donations and grants to cover the rest.

If all this sounds vague, that’s how this work group has worked. Usually there are no motions with specifics, just remarks and a general nodding of heads.

The group’s next meeting is at noon Monday, July 10, at City Hall. (hh)