Parking pattern: Reversing to the left 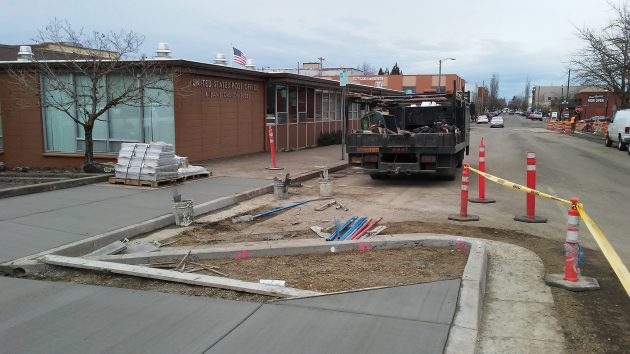 The curb has been poured, outlining the future parking pattern at the post office on Second Avenue.

While we’re at the Albany Post Office, take a look at the novel — for Albany — parking pattern taking shape: Angled spaces on your left into which you will be expected to back up.

The diagonal back-in parking on the left-hand side of two one-way streets — Calapooia and Second — was recommended by the advisory board of the Central Albany Revitalization Area (CARA) last year. The city council then went along with the design when it awarded a contract for pavement, sidewalk, utility and lighting work in the area around and near the post office. The construction has been going on for a few weeks.

There will be 35 back-in diagonal spaces on the two streets. They will replace the 18 or so parallel spaces that exist on both streets now. In addition, there will be 12 back-in spaces on First Avenue on the north side of the post office block.. But they will be on the right-hand side of the street directly in front of the Albany Carousel.

I’ve been skeptical that drivers will find it easy to back into 9-foot-wide spaces on their left and end up with their rigs precisely between the lines. I’m hoping that my skepticism will prove unwarranted. But then again, as you can see below, even ordinary diagonal parking seems be a challenge now and then. (hh) 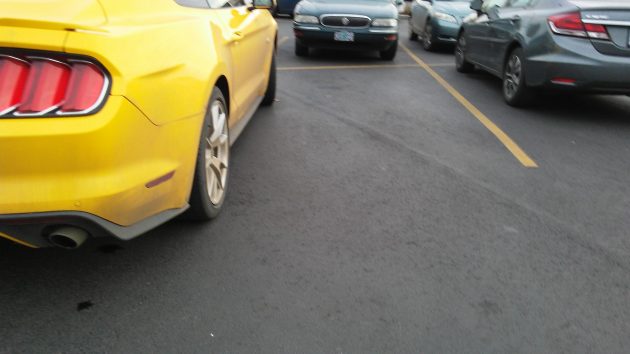 
5 responses to “Parking pattern: Reversing to the left”