Finally, the Highway 34 bikeway in Linn County is finished and open to traffic. It allows cyclists to make a convenient and relatively safe round trip from Albany to Corvallis, though when I tried it out Thursday afternoon, mine was the only bike I saw all along the roughly 25 miles of the route.

As promised, Rick Little of ODOT had emailed me Thursday that the installation of a railing had been completed and the $1 million bikeway, part of a $3.38 million highway project, was now open. (Officially it’s called a “multi-use path,” but a bikeway is what it is. The railing is supposed to keep all those “multi-users” from falling into the Oak Creek flood plain west of Colorado Lake Drive.)

I picked up my bike in West Albany, headed down Riverside Drive, sailed along the new bikeway, admired the Owl Creek bridge, passed a deer carcass in the verge between path and highway, and followed the path as it ducked under two Willamette River bridges and then led into Corvallis on the wooden sidewalk of the Van Buren Street bridge.

Then I jogged over one block to Second Street, turned right and let the quartering tailwind from the southwest — along with the draft created by steady highway traffic — push me back to Albany on Highway 20. It’s hard to imagine a smoother ride.

Since it was a mid-November afternoon with glowering skies and spitting rain, I was not surprised to be by myself on this route. I expect there will be plenty of riders, even commuters, during busier times of the day, especially when the weather is fine. (hh) 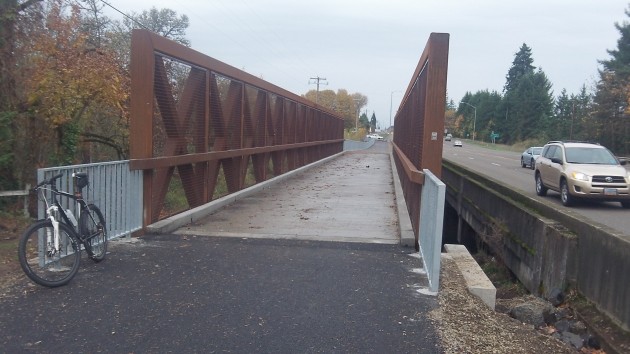 Looking east: The bridge across Owl creek alongside Highway 34.