On the riverfront, Wheelhouse all lit up 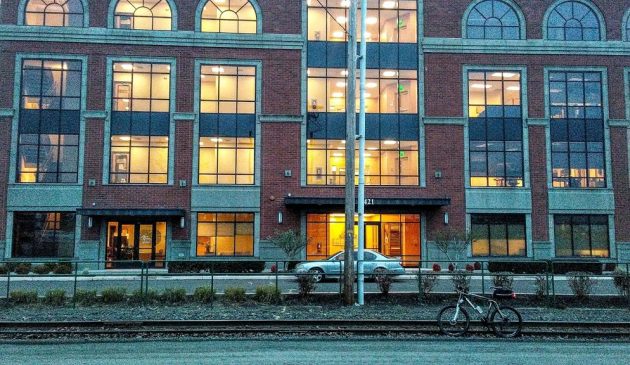 The riverfront Wheelhouse building in Albany on the evening of Dec. 18.

As Albany embarks on redesigning its Willamette riverfront, an evening bike ride along Water Avenue last week reminded me that a significant element of redevelopment had taken place nearly 10 years ago.

The facade of the four-story Wheelhouse building, with the lights on inside, is what served as the reminder. Looks pretty impressive the way it is lit up, I thought at the time.

Completed in 2010 at a cost of about $7 million, with about $750,000 in urban renewal assistance from CARA, the Wheelhouse is a four-story office building. The owner’s initial plan to open a restaurant on the ground floor did not work out. So unless you have business at one of the offices, there’s no reason to go there. (A robotics company has occupied the ground floor for about a couple of years.)

Now CARA — essentially the City of Albany  — has launched a $2.4 million program to come up with redevelopment plans for the riverfront from Washington to Main streets. The CARA board has been told there may be interest in private redevelopment once property owners or developers know what the city intends to do with Water Avenue and the public land along the river.

The idea of the downtown urban renewal district, CARA, is to increase the taxable value of private land near the riverfront. The Wheelhouse, for example, though assessed at less than half its reported construction cost, paid about $79,000 in property taxes in 2019. That’s compared to a mere $9,576 in 2009, the year before the building was finished.

And a short distance to the east, the 60-unit Edgewater Village housing development will yield an estimated $240,000 in annual property tax once it’s finished. (My estimate is based on the $4,400 tax bill of one of the completed houses this year.)

Nobody knows what if anything will happen along the river front once the city’s design project is completed. But there may be clues in projects like the Wheelhouse, completed long ago, and Edgewater Village, still being built. (hh)


2 responses to “On the riverfront, Wheelhouse all lit up”