On the riverfront: What kind of development? 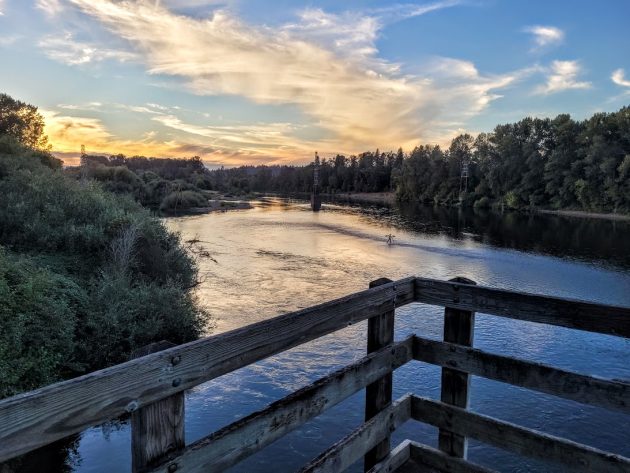 Looking west from one of Albany’s Willamette riverfront platforms on Tuesday night.

With nothing more urgent on my plate, I stopped on the Albany riverfront Tuesday evening to look around. What I saw was nothing sensational or new, but it prompted me to say:

Here’s what I was talking about when I mentioned what looked like a “flying man” down on a gravel bar: 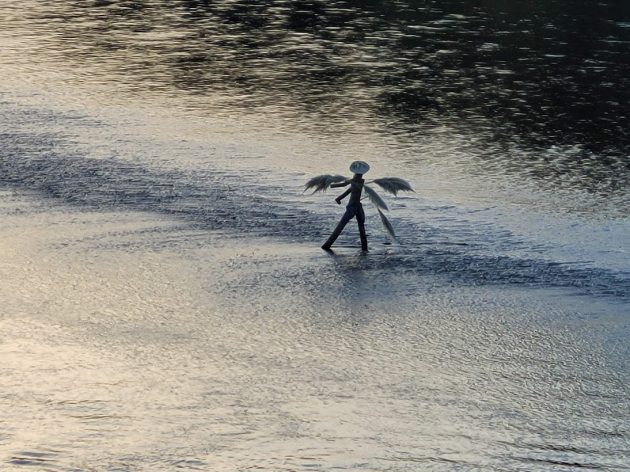 He’s not flying, obviously, but he does seem to have feathery wings.

One of the things I appreciate about the Albany riverfront is that it is not busy. It is quiet, pretty much all the time but especially late on a weekday toward the end of September.

That could all change.

The City of Albany has spent between $2.5 and $3 million on planning for changes on the riverfront. The plans are all about beautification and addding amenities, especially at Monteith Riverpark.

But the underlying motivation is “development.” That’s the aim of the downtown urban renewal district, CARA, through which the Albany Waterfront Project is being financed.

Development can mean a lot of things. But most of them probably involve more buildings, more people, more traffic.

One kind of development might mean a revival of riverfront restaurants, which would be a good thing. We used to have two of them, and when they closed it was a loss.

Another kind of development might mean multistory apartment blocks overlooking the river, like The Banks apartments near Bowman Park. People who enjoy the present riverfront the way it is — me included — would think of that as the kind of development to be prevented if we can.

How things go on the riverfront depends, in part, on decisions the city council will make in the next few months. So we better pay attention to what the council has in mind and what it wants to do. (hh)


6 responses to “On the riverfront: What kind of development?”