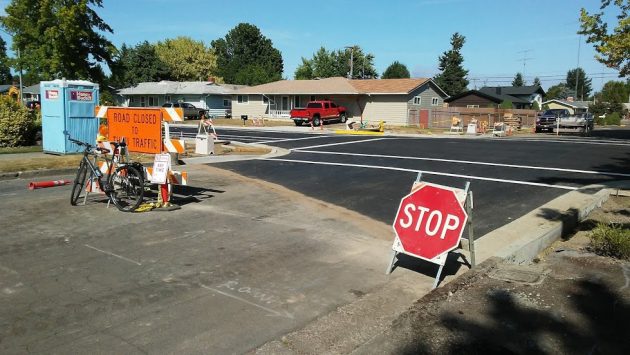 The new pavement on Hill Street at the corner of 31st Avenue on Aug. 13.

After being torn up for a complete reconstruction, 10 bocks of Hill Street in South Albany now have been repaved and restriped and will reopen to through traffic soon.

How soon? No later than the end of the month, says Chris Cerklewski, the engineer in Albany Public Works overseeing this project.

If you’re on a bike, the beautifully resurfaced street is open already. And the new bike lanes are a nice addition to encourage what they call “active transportation.”

Pacific Excavation, of Eugene, has the roughly $3.1 million city contract to rebuild Hill Street from 24th Avenue south to 34th. The work started in mid-June, closing the street to all but residents.

“The project is on schedule and the road should be open to through traffic no later than the end of the month,” Cerklewski told me when I asked. “Work will continue after that for a few weeks to finish up landscaping and other cleanup items. The street trees will be planted this fall.”

When I tried out the new bike lanes this week, workers were still installing new sidewalks near the southern end of the project area. I wondered why it was necessary to rebuild the sidewalks, which entailed digging into the lawns in front of the houses lining the street.

Hill Street is an important traffic artery in the Albany street network, and for years drivers pleaded with the city to do something about its rough shape. Now that’s been done, and the street offers a smooth ride all the way between Pacific in the north and 34th in the south. (hh) 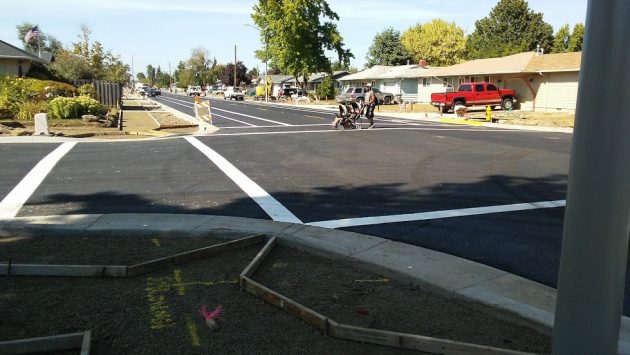 Looking north along Hill from 31st Avenue. The sidewalks still need to be done.

6 responses to “On Hill Street, no more bumpy rides”