Next on Hill Street, about 90 new trees 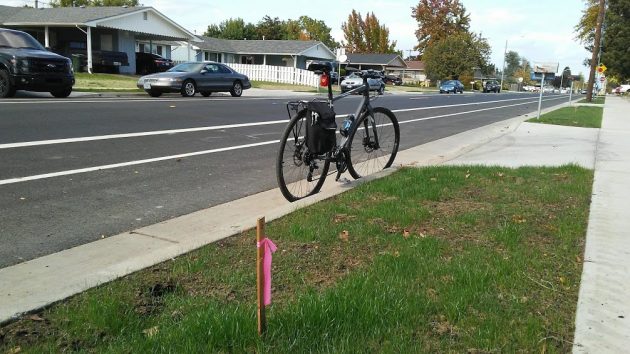 A tree will go here and everywhere there’s a similar stake along the newly rebuilt section of Hill Street.

Before they rebuilt 10 blocks of Hill Street in South Albany this summer, all the street trees were cut down. Now the trees are about to be replaced.

On a ride down the bike lane on this newly paved section last week, I noticed a bunch of short stakes sticking out of the ground in the new parking strips on both sides of the street.

Looked like markers for new trees, I surmised. To be sure, I asked Chris Cerklewski, the engineer in Albany Public Works overseeing the project.

“The stakes out on Hill Street in the landscape strip are indeed for the street trees,” he replied. “There will be approximately 90 trees planted with the project in mid-October. The trees will include Japanese Snowbell, Pattern Perfect Maple, Paperbark Maple, Snowcloud Serviceberry, Persian Ironwood, Firestarter Tupelo and Peking Lilac. These varieties of trees were chosen in consultation with the city forester based on local availability and have a good track record for survival as street trees.”

Pacific Excavation of Eugene has the approximately $3.1 million city contract for this year’s Hill Street project. The contractor rebuilt the street and sidewalks, plus utilities, from 24th Avenue south to 34th.

The bulk of the job has been complete for some time. Planting the trees remains. When they’re grown, they’ll complete the picture of a well constructed, good looking city street. (hh)


7 responses to “Next on Hill Street, about 90 new trees”