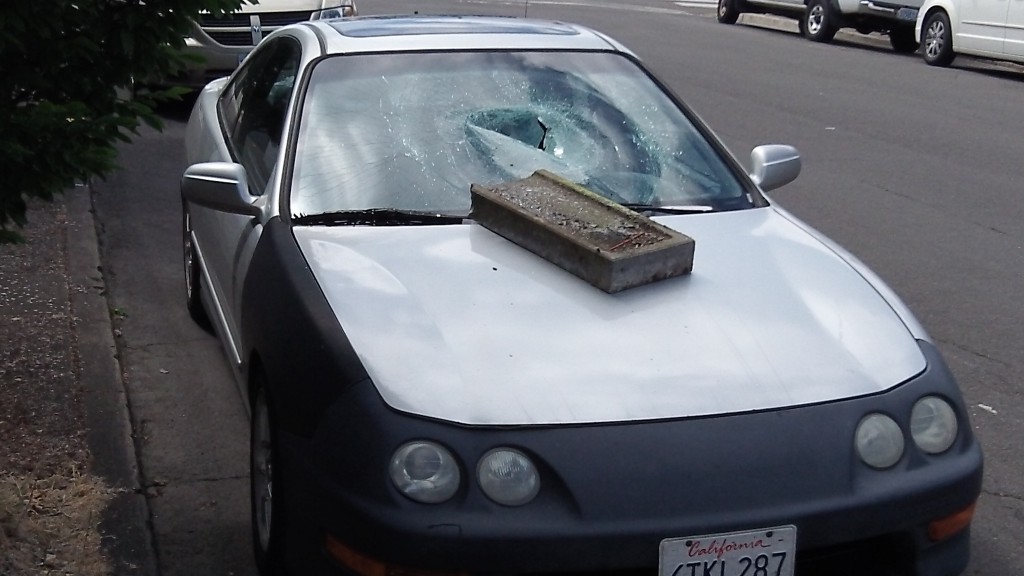 I have no idea what the details of this story are because there was no one around to ask. What it looks like is that someone heaved a hefty chunk of concrete into the windshield of this car and left it where it fell. I shot this photo around noon on Saturday while walking up Broadalbin Street from the river, back to where we had left our own car near the Farmers’ Market. I would not have thought that there’s normally a great risk from vandalism in parking your car on a downtown Albany street. But this scene gives me pause. I hope that whoever did this — because of mindless rage, a momentary destructive urge or just plain overwhelming stupidity — is caught and held to account. Fat chance, I know. (hh)

Ted Salmons responded on May 26:  Sadly the basic definition of vandalism almost always includes the term mindless. Usually these non-thinkers that choose to destroy without reason do it because other than being clueless they have little fear of punishment even if caught. Now I’ll admit that these criminals (yes I used that ugly word criminal instead of “misguided”) don’t need to be thrown into jail.  But…..  how about a couple of hundred hours of community service? Yes I know it costs the city/county money in the form of wages for those supervising people performing community service. But how about this as a part of the sentencing. The convicted person is required to pay for the supervision of his/her community service. If they want one on one supervision they pay the full price. If several come to an “agreement” they can split the cost and do their community service together.  Oh, and as an incentive they’re not eligible for any state funded services until their community service is completed. Harsh? Perhaps. But an attention getter?  Definitely.

My response: Sure, but first you gotta catch ’em. (hh)