Maybe this path only looks closed 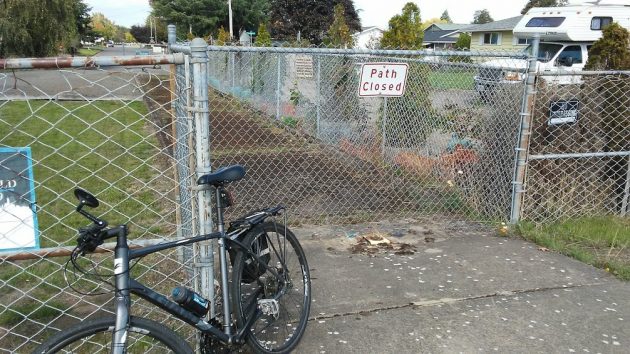 The closed shortcut from South Albany High School to Ermine Street, the way it looked on Sept. 27.

Back in August, a reader’s question led to the discovery that an Albany ordinance provides for a shortcut between Ermine Street and 36th Avenue to be “permanently maintained as a pedestrian walkway-bicycle path,” which raised the question of why it’s been closed for 10 years.

Why? Beause in 2009, neighbors complained of unruly behavior by young people hanging around that 50-foot-long path. The council listened and decided to fence the path temporarily so people couldn’t use it. In 2010, the council approved a motion by Councilor Bessie Johnson to keep the fencing in place. No one at the time mentioned the 1975 ordinance )No. 3826) that vacated this section of Ermine Street but said the center 10 feet must remain a permanent pathway for people on foot or bikes.

Since the story appeared here on Aug. 18, nobody on the council seemed to react to this discrepancy between reality and what a city law says. So I asked Mayor Sharon Konopa, and she turned to City Manager Peter Troedsson.

Troedsson came back with this:

“In my opinion, the path is still open. There’s nothing keeping anyone from walking down to the end of the path. The City did install a fence at one end to prevent the problems associated with through traffic but could remove the fence at any time.

“Even if one maintains that a dead-end path is no longer a path, the ordinance doesn’t say it must be maintained continuously as a path.  It can remain closed until such time as the original problem is no longer present. If and when the City considers that the problem would no longer be a problem, the closure at the one end could be removed. Many of the citizens in the neighborhood are grateful for the elimination of the original problems.”

Ingenious, eh? (Actually, there’s a fence at the other end too, but people can go around it. When they get to 36th they have to climb a fence or turn around.)

Here’s a public path that hasn’t been usable for 10 years and will remain closed indefinitely. Does anyone think this qualifies as “permanently maintained as a pedestrian walkway-bicycle path”? If the council thinks so, they can let it go. If they don’t want people to think they don’t care what laws say or what words mean, they should either open that path or amend the law. (hh)


14 responses to “Maybe this path only looks closed”