Just how is this a ‘permanent’ path? 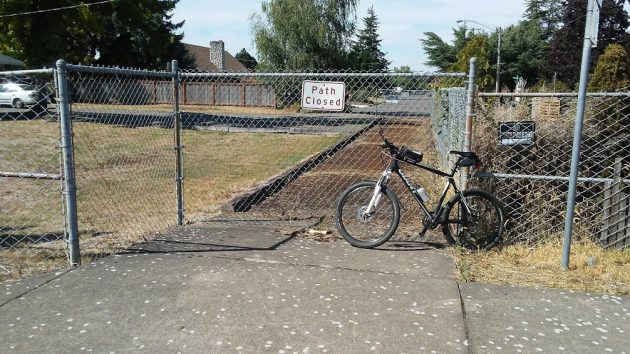 Ten years ago, the Albany City Council closed a short bike and walking path near South Albany High School to cut down on teenagers causing trouble. The city says neighbors are still grateful, but the continued closure appears to violate a city law passed in 1975.

Only 50 feet feet long, this little path runs between 36th Avenue, across from the Community Pool and South Albany High, and Ermine Street to the north. The council fenced it off in May 2009 and voted to close it permanently in July 2010. This was in reaction to complaints about “vandalism, littering, loitering, and other unwanted activity on streets and other property near their homes,” as a memo to the council put it.

Why bring this up now? Because of an email from Julie Van Hoosen, who has lived in Albany most of her life. “Beginning in the 1980s,” she writes, “we used to enjoy biking or walking the Perwinkle Path, beginning at 36th (Avenue) …and traveling north through the neighborhood and Grand Prairie Park…”

She was “disheartened” when the path was closed, she writes. “As a resident of South Albany (Deerfield Park area), it would be wonderful to avoid walking along Waverly (Drive) to access Grand Prairie Park or to begin the path.”

She wondered about the process. “Was there a public hearing or meeting, or can the council just decide to close a public path based on a few complaints?”

No, there was no formal hearing. On July 28, 2010, Councilwoman Bessie Johnson “moved to retain the temporary fence that closes the pedestrian path at Ermine Street and 36th Avenue S.E.,” the minutes of that meeting say. “Johnson said she had talked to the neighbors in the area. It is not perfect, there are still problems but overall they are pleased.” Her motion passed 5-0.

At a “National Night Out” gathering this month, the city officials attending said, they got renewed thanks from nearby residents about the closure.

How did that short path come to exist in the first place? Turns out that according to the 1973 plat of the Case Addition in South Albany, Ermine Street was intended to go through to 36th. But the council vacated the 50-foot section from Westwood Place to 36th by passing an ordinance following a public hearing on Jan. 8, 1975.

That ordinance says: “The people of the city of Albany ordain … that the center 10 feet of deemed right of way be permanently maintained as a pedestrian walkway-bicycle path.”

According to its minutes, the council was not made aware of that phrase in the law –“permanently maintained” — when it took its vote to do the opposite in 2010.

So now what? Maybe the council, in cooperation with school authorities, could figure out a way to discourage whatever problems the neighbors had experienced before, without depriving the South Albany public of a convenient route for active transportation, either on a bike or on foot. (hh) 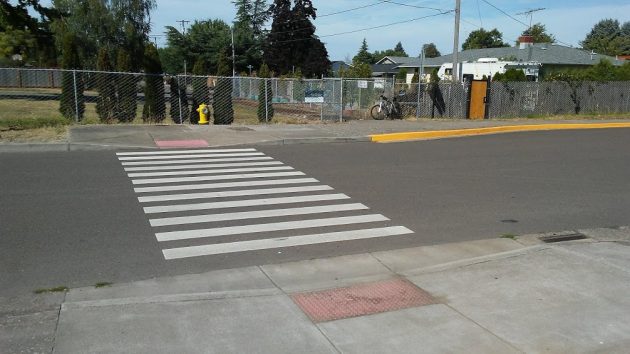 This crosswalk on 36th leads straight to the path, which can’t be used.