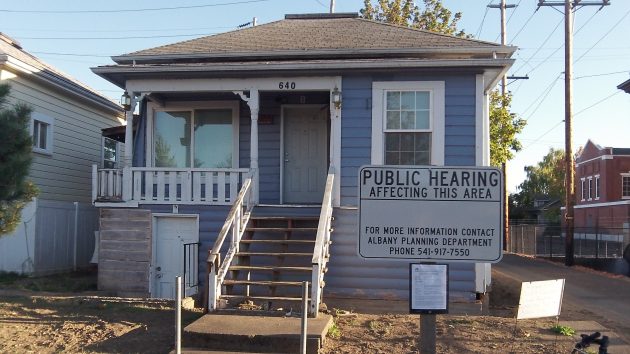 The “public hearing” sign at 640 Third Ave. S.W. got my attention as I was riding by the other day.

This old house near the entrance to Albany’s Bryant Park is in pretty poor shape. Now the owners of the triplex rental plan to fix it up, get rid of some unauthorized alterations, and restore it as much as possible to the way it may have looked after it was built more than a century ago.

Pam and Kevin Ostby, of Needles, Calif., bought the place in 2011 for $15,000 because its trashy appearance made it hard to sell the renovated houses they owned on the rest of the 600 block of Third Avenue S.W. Now their plans to renovate this property, at 640 Third S.W., are pending before the Albany Landmarks Advisory Commission. The panel scheduled a public hearing for 6 p.m. Oct. 5 in the council chambers at City Hall. The planning staff is recommending approval of the plans.

What caught my eye on the public hearing notice was the mention of vinyl windows, which used to cause the controversy years ago when they were proposed in the historic districts as a practical alternative to the wooden originals. This time, though, no problem. The Ostbys got two bids for installing 10 new windows. Wooden ones would cost nearly $6,500, and vinyl ones that look like the originals are $1,451. The planning staff agrees that wooden window frames, while preferred for historical authenticity, would be cost-prohibitive.

The little house has one three-bedroom unit on the main floor and two one-bedroom apartments in the basement. The Ostbys submitted photos showing the conditions when they bought it. The yard was full of trash, and the inside was a mess. Their application says the structure was unlivable but people had occupied it anyway. A note in the county assessor’s report from 2002 said: “Rough condition. Value reduced. Also 3 living units now if you can call them that.”

The Linn County tax department says the structure was built in 1905. Albany says it dates from 1890. Either way, it now looks as though a complete renovation will make it livable again. (hh)