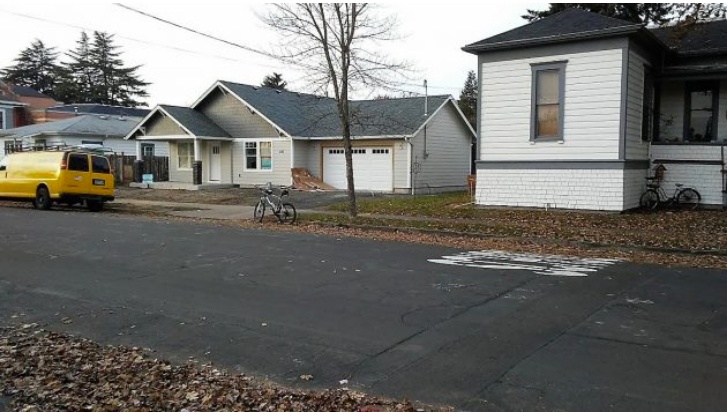 A ride this week took me down Fourth Avenue in Albany’s Hackleman Historic District, and I stopped to photograph a newly built house that looked close to being completed. I was struck by how nicely it fits in with the older houses on the street.

Because the address, 527 Fourth Ave S. E., is in a historic district, the plans and design had to be approved by the Albany Landmarks Advisory Commission. The commission gave that approval following a hearing on May 2.

The builders, Michael and Linda Quinn and their firm, Quinstruction Development Inc., had gone to some lengths to make their design compatible with the neighborhood. Their Landmarks application showed numerous illustrations of windows, siding and other features of houses in the vicinity.

The single-story houses on both sides of 527 are of a venerable age. The one to the east was built in 1888, though renovated since, and the one on the other side dates from 1915, according to the records at the Linn County assessor’s office.

The new house measures 1,420 square feet, plus a 180-foot patio and a 380-foot garage. Before the project is done, the builders will construct a new sidewalk in front and replace the street tree that destroyed the old one.

The house was built on a vacant lot where, on Sept. 6, 2011, a fire destroyed the century-old house that was there. And as the Democrat-Herald reported two days later, the fire department had to have the place bulldozed to put out the flames. The Quinns bought the lot in February 2018 for $47,000, according to the county.

When I went by Tuesday, a sign out front said the place was for sale. Whoever resides there will get to live in a historic neighborhood with the conveniences of a modern house. (hh) 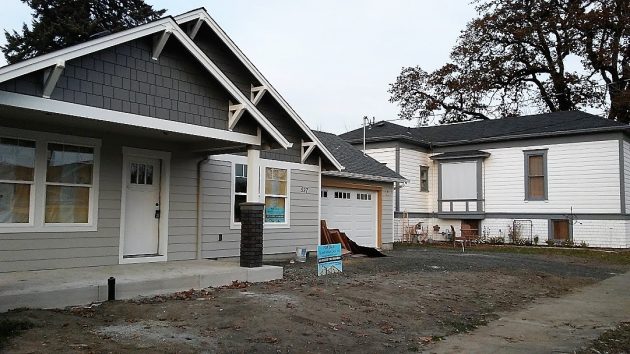 Another view of the place without the distracting presence of my bike parked on the curb.