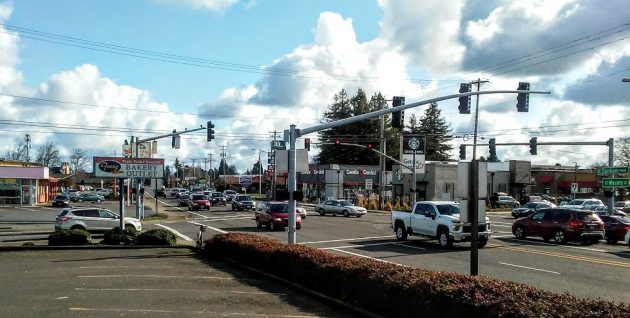 ODOT says the signals at Waverly and Santiam Highway are “failing,” but on Feb. 2 they worked fine.

ODOT has invited the public to review a draft of its 2021-24 transportation improvement plan, including numerous projects in the Albany area. On a rainy winter evening, what could be a better use of time than to read and wonder about some of the items on the list?

The so-called Statewide Transportation Improvement Plan lists all the things the highway division wants to spend money on over the next four years, and a new version comes out every couple of years. You can study the draft now under consideration here. The list is long, but projects are organized by county and the “find” function on your computer may help.

What caught my eye was what ODOT engineers have in mind for Highway 20 (Santiam Highway) in Albany, from Geary Street to Waverly Drive. They figure on installing lighting at Waverly, putting in raised medians or traffic separators from Geary to Waverly, possibly erecting a sign bridge on Pacific upstream of Geary, and replacing the signal at Waverly. All this is contemplated for construction in 2021 at an estimated cost of $4.1 million.

This is a little confusing, because elsewhere in the plan there’s a separate project, suggested by the Albany Metropolitan Planning Organization to “replace the failing signal” at US 20 and Waverly “to improve driver visibility and safety.” This would be done in 2023 at an estimated cost of $2.8 million.

Maybe you have to be a traffic engineer to see the need for all that. Raised medians on Santiam? Wouldn’t that keep us from making left turns to access all the business driveways and parking lots on the opposite side of the street?

In what sense are the traffic lights at Santiam and Waverly supposed to be failing? They direct thousands of vehicles every day. Even my bike crossed there on green several times lately, which I consider a great success.

Elsewhere in Albany, the STIP lists upgrading the warning devices at the Queen Avenue rail crossing for construction in 2021. Also next year, the plan shows repaving a portion of Queen Avenue. Presumably that’s when the Union Pacific will finally upgrade the grade crossing surface so it quits rattling vehicles and their occupants as they shudder across. The cost figures are confusing as they include a mysterious $1 million item called “other,” so there’s no point repeating them here.

Every few weeks, it seems, a crash on I-5 north of Albany shuts down the freeway for hours at a time. The STIP proposes to install traffic cameras along I-5 between Albany and Salem in 2024, at a cost of more than $5 million. This would allow “variable-message signs to provide real-time information to drivers.” That would help driver avoid long waits standing still.

A few weeks ago the Albany Bike-Ped Commission heard about an ODOT plan to improve Madison Street from First to Pacific as a bicycle route. The plan calls for bike lanes, speed humps, and green bike lanes at conflict points, all to improve biker safety. The STIP envisions this to cost about $158,000 and be done in 2024. With such a relatively modest cost, couldn’t it be done sooner?

ODOT plans to have public open houses before this STIP is adopted. Maybe they’ll explain the need for and proposed cost of some of these projects then. (hh)