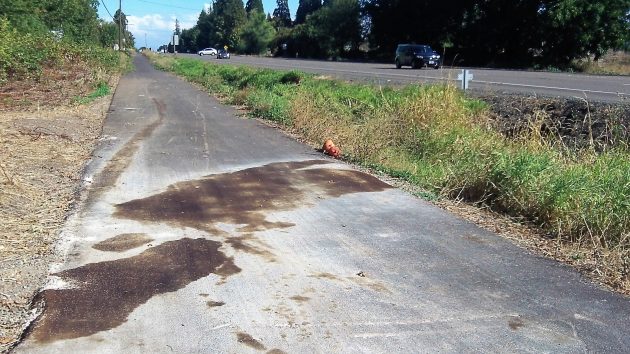 Looks like a crash happened here, leaving scratches and an oily mark on the Hwy. 34 bike path.

The million-dollar bike route on the north side of Highway 34 east of Corvallis is less than a year old, but it doesn’t look new any more. It could use a little attention on the maintenance front.

Someone emailed me this: “I have been keeping junk off of some of it, but the weeds and blackberries are too big and too many
for me to take care of. The blackberries are growing across the path making tripping on them a legal hazard. Provide me the mower and I would be willing to operate it for nothing. Also someone spilled oil as well as (caused) deep scratches in the bike path… ”

So I got on my bike and took a look. My correspondent was right about the weeds and berry vines along portions of the new path, the 1.9-mile section of between Wolcott Road and Riverside Drive. An ODOT contractor completed that section of the path last November at a cost of roughly $1 million, part of a $3.38 million project at the Peoria Road intersection.

The oily patches and gouges in the path’s pavement look like the results of a motor vehicle crash, and the oil has been sopped up as much as possible. As for the weeds, they don’t hamper traffic on the path yet. Left unchecked, they might eventually encroach too much. The thorny vines snaking their way cross the pavement in the 29000 block are a threat, not as much to people on foot as to the tires of bikes whose riders don’t see them in time to swerve. 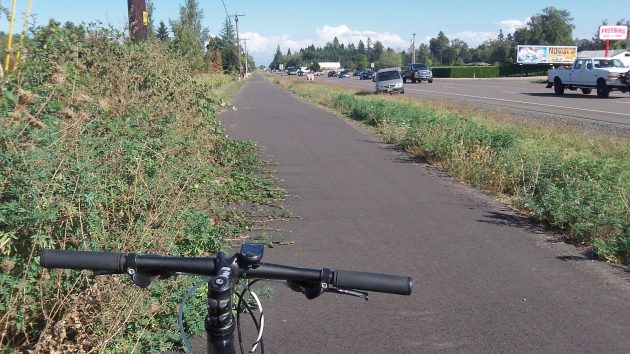 So far the bikeway is mostly clear

Maybe an ODOT maintenance crew could give the path a going-over once or twice a year. Or this might be a project for volunteers organized under ODOT’s “Adopt a Highway” program. There’s a fair amount of paperwork involved with the latter, though. Before tackling invasive species (presumably including blackberries), highway adopters are supposed to write a plan and get approval from the Department of Agriculture.

As an alternative without paperwork, maybe next time I head down there, I’ll remember to pack some clippers and cut those barbed vines back. Unless ODOT gets to it first. (hh) 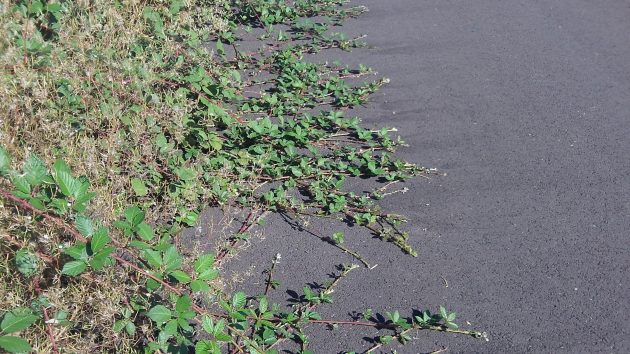 But if they grow much farther, these vines will threaten tires.