Let CARA do its job: Revival 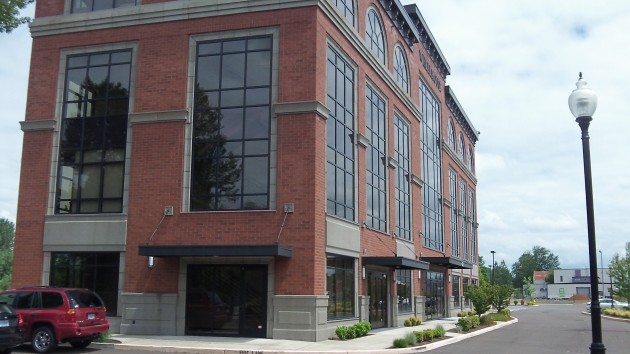 The Wheelhouse, where CARA will have its open house from 4-7 on June 4.

CARA, Albany’s downtown urban renewal district, will hold a public open house Wednesday (June 4) to collect suggestions on which “public infrastructure” projects it should pursue. But hanging over the agency now is the proposal to use its funding to help pay for the central fire station and expansion of the police headquarters. Tempting though that idea seems, it runs counter to the purpose of economic revival on which the agency is based. 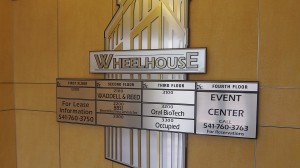 Directory shows the Wheelhouse is not as empty as it looks.

The open house will be at the Wheelhouse, the privately funded riverside office building that also got some support from CARA. The CARA board has proposed to use about $3 million from its latest round of borrowing for street or utility projects in which there is some hope they would encourage more private investment. They’re talking about improvements along Water Avenue and Main Street, among other things, and even on the Dave Clark Path, but it’s hard to see any blockbuster private developments resulting from those.

Proponents of using CARA to fund the police and fire stations point out this would lessen the burden of a big bond issue on property owners. In their eyes it would also divert a big chunk of CARA funds to a cause far sounder than some of the other proposals.

Could it be done? Our faithful reader Gordon Shadle said the other day, in a letter to the local paper, that the CARA plan authorizes spending on public facilities, a term that should cover the police and fire stations, so no change in the plan would be necessary.

Here’s what the 2002 CARA plan actually authorizes in terms of projects listed under the heading of “public facilities.” It describes them this way: “Establish and enhance facilities such as libraries, museums, performance areas, parks and the arts.” All the examples are places the public can use and presumably enjoy, places that would attract people downtown in the cause of economic revival. The police and fire stations do not meet that test. They are not open to the public. They are not potential attractions that bring in visitors. They are owned by the public the way the sewer plant is owned by the public, but they are not “public facilities” in the context of the CARA plan.

There’s another aspect: CARA takes property taxes collected on new value that would otherwise go to the regular taxing districts including the county. In theory, they will get reimbursed from tax revenue on all the value that CARA manages to add to the district once it is dissolved, which the plan estimates will happen in 2027. By then, the plan estimates Linn County will have forgone $11 million in taxes, the city of Albany twice that much and the schools $15.8 million. The amounts are smaller for other taxing districts.

Do those other units have a responsibility to help Albany build fire and police stations with urban renewal taxes without any hope of getting the money back because the stations are tax-exempt?

The CARA program, more than a dozen years old now, has yet to hit its stride. Its success has been substantial but far below the expectation when it was begun. It was intended to carry out the Town Center Plan to keep the core of the city from dying. It was also intended to renew the large area east of Lyon Street, where blight was widespread. A start has been made, even though it’s been  far slower than it should have been. We, meaning the whole community, should demand that this program get going on the big things it was supposed to accomplish. Let’s not sidetrack it with projects it was not meant to do. (hh)


5 responses to “Let CARA do its job: Revival”