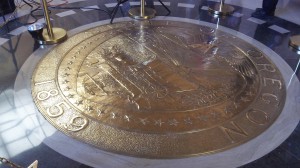 It’s as though the motto on the state seal was “More!”

Governor Kitzhaber is pushing for a special session of the legislature that would raise taxes in order to restore teaching days and jobs in Oregon school districts. His statement confirms that where state government is concerned, enough is never enough. It always wants more — always for a good cause, of course.

On Sept. 4 the governor said he had asked House and Senate leaders to prepare for a special session on Sept. 30 in order to enact a package of public pension changes and revenue increases. The pension changes would reduce the system’s unfunded liability, but whether they would stand up in court is not known. The package also has about $200 million in tax increases, and they would take effect right away. At last report, one item in the package would repeal the state tax deduction that senior citizens can take for out-of-pocket medical expenses.

The governor complained that “even with increased funding this year, few districts have been able to restore all of the teaching positions and school days lost during years of cuts.” Maybe that’s because they approved contracts for higher pay even while the taxpaying private sector continues to struggle.

Instead of talking tax hikes, a prudent state government would aim for lower taxes and stability so people knew what they faced from year to year. (hh)

From Jill Morgan, via Facebook: Yep, that should encourage people to go into teaching as a profession…low pay, poor working conditions, plus take away their retirement plans….  Good plan Kitzhaber! If I had to do it all over again think I would go into banking!

From Ted Salmons:  Well you certainly nailed down Kitzhaber’s ideology and one of the “planks” of the Democratic platform.  “Enough is never enough.”  It always seems that the first thing to be threatened by funding constraints on the state/county/city level is education, police and fire.  And why should they quit using a scare tactic that works more often than it doesn’t?  Come on legislators.  Call his bluff.  He can call you into as many “sessions” as he likes.  Come together, convene, adjourn and call it a day.  Don’t let him dictate what legislation you do or don’t pass.  Just who does he think he is, Obama?  We’ve got enough of that attitude on the national level.  Don’t let this all hat and no cattle “cowboy” get by with it.