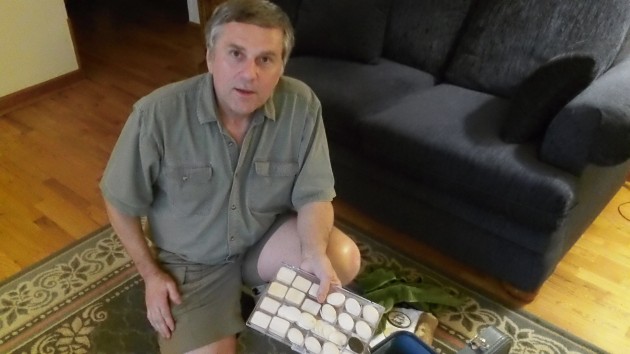 Kenn Holmes with some of his many pieces of ivory he plans to turn into works of scrimshaw art.

Well, what do you know! At least one of this year’s questionable bills seems to have died a well-deserved death in the Oregon House. It’s Senate Bill 913, which would hurt some people in Oregon without doing anything substantive for the African elephants it is intended to save.

The bill would outlaw the “trafficking” in ivory including the tusks of extinct woolly mammoths, ostensibly to discourage the poaching of elephants so their ivory can be sold, mostly in China. But the legislation would also make worthless any ivory Oregonians obtained legally well before Congress banned ivory imports years ago.

SB 913 had been passed by the Senate and was pending in the House Judiciary Committee. The committee had scheduled action on the bill last Thursday, but the work session that day was canceled. I asked Rep. Andy Olson, R-Albany, what happened. He is a member of the committee, and this morning he sent me an email in response:

“There were a few folks throughout the building that were opposed to the bill. The proponents had submitted a few amendments, but there was still serious dislike for the bill, even with members on the Judiciary committee. The last amendment revealed that ivory on guns and knives would not be subject to penalty, and a three year moratorium on mammoths was possible. The chair chose to close down the committee Thursday without giving any further attention to the bill.”

So is that it? Probably, though no bill is ever completely dead until it lies shredded on the floor when the legislature adjourns. But at this point, scrimshaw artists such a Albany resident Kenn Holmes should be encouraged. He has lots of legally obtained ivory bits which he hopes to work up and sell when he retires, and now it looks as though the state won’t interfere with his plans. (hh)