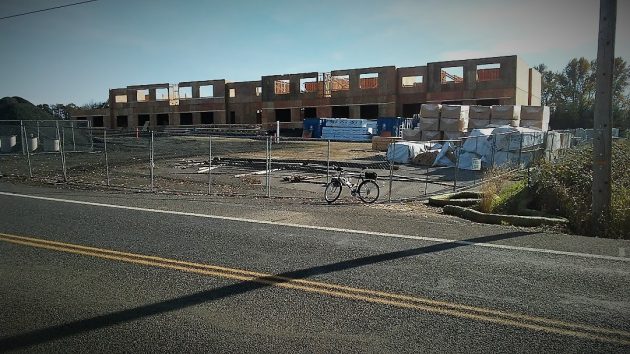 Last Sunday the new Oak Grove Elementary School looked like this in the afternoon sunshine.

If you want to follow the progress of the big construction projects in the Greater Albany Public Schools, a good place to look is the monthly report to the school board from HMK Company, the district’s project manager.

Riding past the construction site of Oak Grove Elementary last Sunday, I could not help noticing that the place is beginning to look like the images architects drew of the two-story school when it was being planned.

The Oct. 28 report from HMK, based on the project status at the end of September, reflected steady progress according to schedule. The wood-frame walls had been prefabricated and were set in place with the help of a crane, and that work continues.

According to the report, the 60,405-square-foot school, being built by Gerding Builders on a budget of $27.5 million, is scheduled for “owner occupancy” during the first three weeks of August 2019.

The bigger school being built at the other end of town, the 90,000-square-foot Meadow Ridge, with a budget of more than $40 million, was reported to be 17 days behind schedule in mid-September. A subsequent report suggested it was falling further behind, and HMK said it was working with main contractor Todd Construction on a plan to catch up.

You can find the latest monthly report from HMK with the latest school board agenda and minutes, available on the GAPS website here.

One highly instructive part of the report lists all the subcontractors working on those two big construction sites and several other bond-related projects in the school district. The lists are full of subs with addresses in Albany and vicinity. That should be reassuring to the GAPS taxpayers who are paying the bill. (hh)


14 responses to “It’s beginning to look like a school”