In deep water on Syria 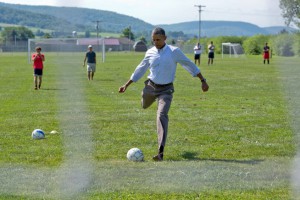 The president should have stuck with soccer. (White House photo)

It’s easy now to start feeling sorry for President Obama. On the question of  Syria, he looks and acts like a guy who is in way over his head. Nothing he does sounds like it makes sense. Every time he says something, the impression grows that he’s floundering. But it’s all his own doing.

First he said President Assad of Syria had to go as a way to end that country’s civil war. Then he did nothing to help bring about that result, and Assad ignored him.

Then he talked about that infamous “red line” if anybody in the civil war used poison gas. When somebody apparently did, the red line disappeared for a while. Now there’s been another, bigger gas massacre and Obama said he planned to take “action,” meaning he planned to have the Navy attack Syria. Then he explained — giving Assad a chance to prepare — that the Navy would fire missiles for two or three days. Then he said no, he would not order an attack just yet and would seek congressional approval instead.

As of Labor Day, it was not certain that Congress would give the green light. Americans don’t quite see how our interests in the Middle East are advanced in the long run by lobbing missiles into a country already reeling from destruction and death.

If the outcome of all this makes the U.S. look weak and Obama indecisive, the president has only himself to blame. (hh)