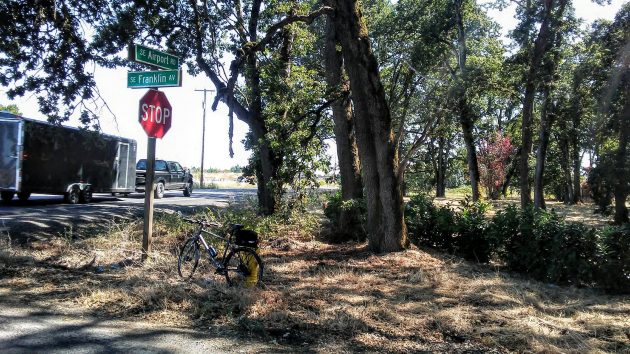 These Oregon white oaks near Franklin Avenue and Airport Road are to be retained in a development approved by the Albany Planning Commission Monday.

In a public hearing that was difficult to follow because of its virtual and remote nature online, the Albany Planning Commission Monday approved a planned unit development of 11 houses and 44 apartments on a wooded site off Airport Road.

There was no opposition, and as far as I could tell the approval was unanimous.

The approved plan calls for the the felling of 258 trees bigger than 25 inches in circumference at chest height. Of those, 251 are Oregon white oaks from 6 to 36 inches in diameter.

Also, however, 58 white oaks of 6 to 39 inches in diameter are to be retained on the eastern side of the 6.5-acre tract, fronting Airport Road just south of Franklin Avenue. The area is to be kept as open space, and there will be no driveways on Airport Road.

In its staff report, the city planning staff said the plan presented was the best way to develop the site, which also contains 1.7 acres of designated wetland that won’t be developed. (It’s not a wetland in the sense that it’s usually wet. The developer and property owner, Mike Shults of St. Paul, said he had to mow the tall dry grass to avoid a hefty city fine.)

Much of the hearing was taken up by a discussion about who would manage the homeowners’ association that the developer will have to establish, even though the management is unrelated to city development standards.

The name of the development, by the way, will be “The Franklin Reserve.” Its only access will be from Franklin.

The apartments are to be for seniors, though I didn’t hear a definition of who will quality.

The project is intended to be built in five stages, with the individual houses being built first. There was no indication when the work would start or when the senior apartments would be finished. 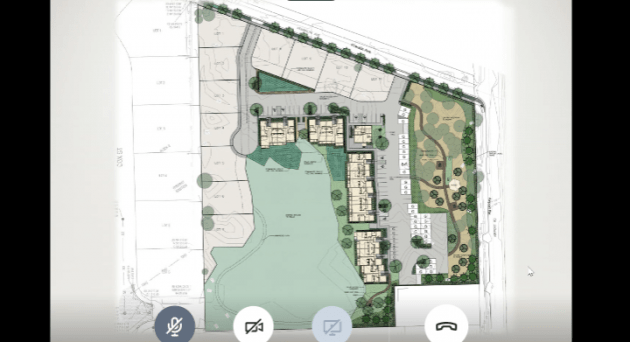 Here’s a screenshot of the planned development. Franklin Avenue is at the top.

The hearing was hard to follow because of the noise online — papers being shuffled in front of open microphones, people banging on their computers or desks, that sort of thing.

If the corona thing continues to make regular meetings impossible, the city might want to get a GoToMeeting expert to train everybody how to use that app. (hh)