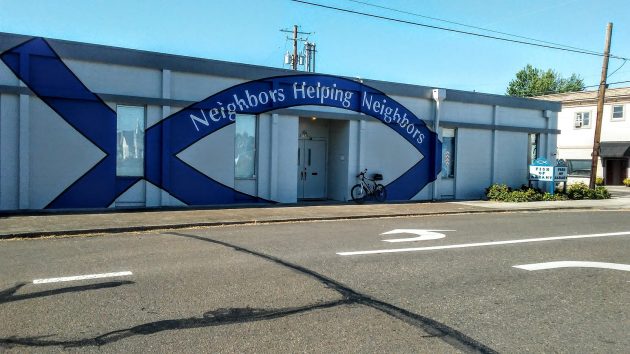 This is Fish of Albany on Second Avenue at Main. The window at left reflects the nearby Cumberland Church.

A big blue graphic now frames the front door of Fish of Albany Inc., the nonprofit that moved to the building at Second Avenue and Main Street last fall.

It’s impossible to miss the message spelled out in large letters, and easy to recognize the early Christians’ symbol of their mission and their faith. (Fish moved into this building in the fall of 2020. You can catch up with the details in this story that appeared here last September.)

Eileen Hinckle, the gifted muralist based in Corvallis, painted the image in mid-May. The Fish board considered various themes including a pictorial mural before settling on this idea, and Hinckle sketched it out, Fish Executive Director Holly Ryan told me.

I asked the artist whether this was properly called a mural or something else. In an email she explained:

“I see most public two-dimensional art as existing on a spectrum without well defined lines between different categories, and certain artwork is actually a combination of different categories. This includes murals, graffiti, tags, painted signs, and hand painted advertisements (the last one isn’t so common any more), all of which are in conversation with one another and contribute to making the public space more dynamic and vibrant.”

And what should we call this one? “I’m not aware of a specific term for the graphic kind of mural that I painted for Fish of Albany, but there may be one. For me it exists in the public art spectrum somewhere between mural and signage.”

Fish actually checked with the city to see whether the image would come under sign regulations, which might have prohibited it. It’s not a sign, Ryan was told the city said, so there’s no issue.

Fish contacted the artist after getting her name from a mural she painted last year for Reptopia, the reptile business that moved into a former tactical-gear store on Pacific Boulevard and Hill Street. Also last year, the artist created a mural of a person’s face and hands on a wall facing the Lafayette Street trestle off Second Avenue.

What’s next for Eileen Hinckle? “I don’t have any confirmed public projects coming up in Albany,” she told me, “but I do hope to paint more murals there in the future. My next project will be in Corvallis painting a mural for the local Rotary Clubs.”


3 responses to “Fish adds bold graphic to its front wall”