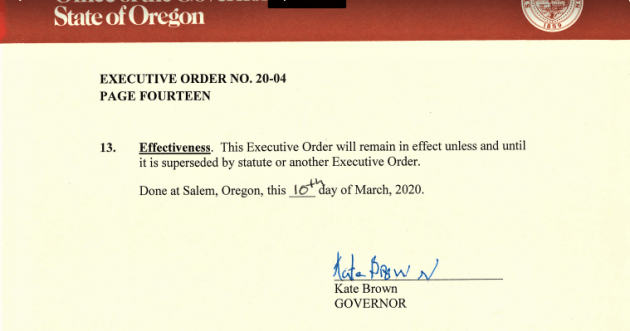 You’re looking at the signature page of Gov. Kate Brown’s executive order to reduce Oregon’s greenhouse gas emissions. The order came out Tuesday. One of the things it shows is that the governor doesn’t write cursive.

It also shows, or implies, that there was no need for the massive carbon cap and trade bill that prompted the Republican walkout during the February legislative session. The order implies this because it claims state agencies have all the authority they need under existing laws to achieve a virtual elimination of fossil fuels in 30 years.

If the authority exists, why fight over the cap and trade bill, which was around 200 pages long and hard to understand? In a mere 14 pages, the governor lays out her program to reduce Oregon greenhouse gas emissions to at least 45 percent below the level of 1990 by the year 2035, and at least 80 percent below the 1990 level by 2050. She says those goals are science-based. Well, who can argue with that?

Her order is aimed at 16 state agencies and departments, from Business Oregon to the Public Utility Commission. She tells them to use all their legal authority and discretion to do everything they can to achieve her science-based reduction targets.

First, though, they are to make plans, hold meetings with each other and various groups, and submit plans to her by certain deadlines starting in this May and running through September. If the agencies do what they’re told, it looks like they won’t have much time to do anything else, including the jobs they were formed to do.

“The following agencies,” Brown’s order says on Page 5, “are directed to report to the Governor by May 15, 2020, on proposed actions within their statutory authority to reduce GHG emissions and mitigate climate change impacts: DEQ, DLCD, ODA, ODOE, ODFW, ODF, ODOT, OWRD, OWEB, and PUC.”

While they’re writing their reports, they are also ordered to participate in an interagency work group on climate impacts to impacted communities. They’ll be joined in these meetings by the Environmental Justice Task Force, Oregon Global Warming Commission, Parks and Recreation Department, and Oregon Sustainability Board.

There’s much more, including details such as these: Shower heads, faucets, and residential ventilating fans. For these are other gizmos sold or installed in Oregon, the Department of Energy is ordered to update energy efficiency standards.

Meanwhile, the Building Codes Division is instructed to rewrite by 2030 the construction codes to make new houses and commercial buildings at least 60 percent more energy efficient than the code requirements of 2006. By Sept. 15, the governor wants a report on that too. “The report should be updated every three years thereafter.”

Speaking of reports, the Oregon Health Authority is ordered to produce one by next year “on the impacts of climate change on youth depression and mental health.” (Presumably they’ll work on that when the corona virus is not taking up their time.)

The crux of the whole thing is the governor’s order to the DEQ. That agency is supposed to “cap and reduce” emissions from gasoline and diesel fuel consistent with Brown’s desired overall reductions by 2035 and 2050. It’s supposed to do the same capping and reducing of emissions from natural gas and other liquid and gaseous fuels.

And by the way, the DEQ is also supposed to “prevent and recover food waste” so that food waste is reduced by 50 percent by 2030.

It would be a surprise if present laws give the DEQ the power to do any of that. If it tries anyway, expect the lawsuits to fly. 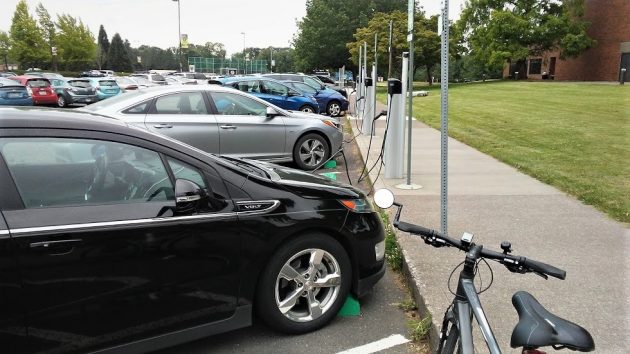 Charging stations at LBCC in Albany. Gov Brown wants ODOT to study ways to speed up the electrification of the transportation sector.