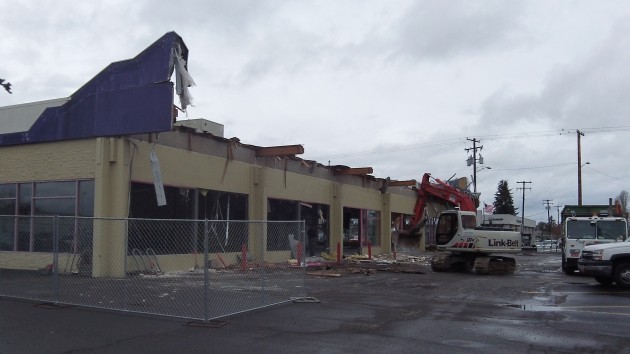 The demolition of the old Hollywood Video building in Albany was at this stage Wednesday.

In case you missed it, last week I mentioned the perhaps less-than-exciting news that the Fred Meyer store in Albany was getting ready to demolish this former Hollywood Video store on its property. Well, on Wednesday the demolition had progressed, but the remnant of the “Hollywood Hills” false front was still visible.

When getting its demolition permit from the city, the company had indicated it planned to take down the building and plant the site in grass. Chances are property taxes on a grassy lot facing Santiam Highway will be less than on an empty building, largely unused for the several years since the video store chain went out of business.

A few blocks away off 14th Avenue, the former Blockbuster video store sits empty as well. Renting movies has migrated to automated kiosks at various places, and to the internet. Some of us miss the chance to ask a clerk what she recommends. (hh)