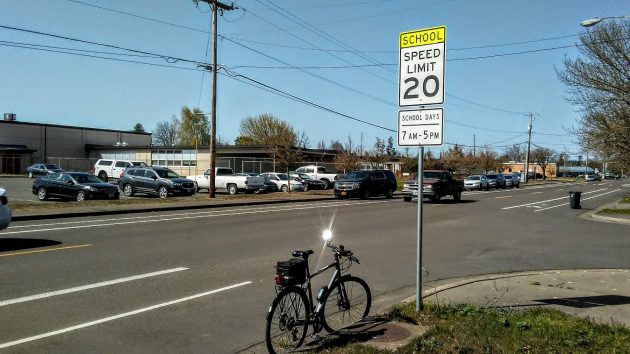 One of the familiar school speed limit signs on Elm Street outside Memorial Middle and West Albany High schools.

On streets running past most schools, the signs say the 20 mph speed limit applies during certain hours on “school days.” But what exactly is a “school day”?

For the past year, drivers have ignored those signs, especially on roads where the normal limit is 40, even though most weekdays were technically school days. They were school days in the sense that teachers were working and pupils were supposed to learn, albeit remotely.

Now Albany schools have returned to in-person attendance in buildings. Except for Wednesdays, described in the lingo of the Covid Era as asynchronous days.

District spokesman Andrew Tomsky explains the term:  “Students will not be in buildings Wednesday, which remains ‘asynchronous’ learning as they have been throughout the school year. That means different things for different levels, but it primarily utilizes independent learning and enrichment lessons. There is also advisory for students to have a chance to communicate with their teachers and specialized services for those students that receive them.”

If no students are in the buildings, is it the kind of school day when you might get a ticket for exceeding 20 mph?

I asked Albany Police Chief Marcia Harnden. “When schools are clearly closed for a day, officer(s) would likely not enforce that speed limit,” she replied in part.

The chief adds this common-sense advice: “Drivers should always assume school is in session and children are present. It is best to drop your speed in case there is a child that may be along the roadway.”

If you do that, there’s no chance of a speeding ticket and you don’t have to worry about whether Wednesday is a “school day” or not. More important, nobody is likely to get hit. (hh)