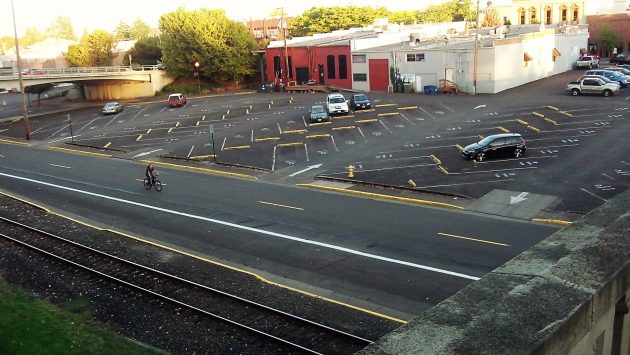 The city-owned parking lot on the south side of Water Avenue between Albany’s Willamette River bridges has about 65 spaces, give or take one or two. City Councilman Rich Kellum has an idea of how to double the number of spaces and develop the site as the “east anchor” of the downtown district’s commercial revival at the same time.

Kellum is completing his first four-year term on the council this year and running for re-election this fall in Ward III. He mentioned his idea during a work session of the council Monday and said he’d bring it up again after his colleagues on the council have had time to think about it.

His idea goes like this: Offer the lot to a developer at no charge in return for the developer building something on the site that would, among other things, double the number of parking spaces. That might be done by constructing a building with parking on the ground floor and the one above, and commercial spaces on however many stories it is practical and economical to build on top of that.

What this would accomplish, if it worked, is to realize one important aspect of the downtown retail refinement plan the Central Albany Revitalization Area commissioned in 2011. That plan envisioned the main commercial street, a quarter-mile of First Avenue, to be bracketed by anchor developments at both ends. At the west end, the Albany Carousel is under construction. But nothing has been proposed, let alone pursued, on the parking lot between the river bridges that is designated in the plan as the east anchor.

Kellum mentioned his idea to me after he read last week’s story here headlined “What about the east anchor.” In the comment section, the story prompted another suggestion from a reader who proposed turning the site into a permanent farmers’ and craft market that would allow market days to be held more than once a week. It sounds interesting but would subtract downtown parking spaces rather than add them.

Its been five years, without any visible action, since the notion of an “east anchor” in that spot was suggested by the city’s urban renewal design consultant. Kellum’s idea needs fleshing out, and whether it’s economically feasible would have to be determined. But it’s encouraging to see some forward thinking on this site. (hh)