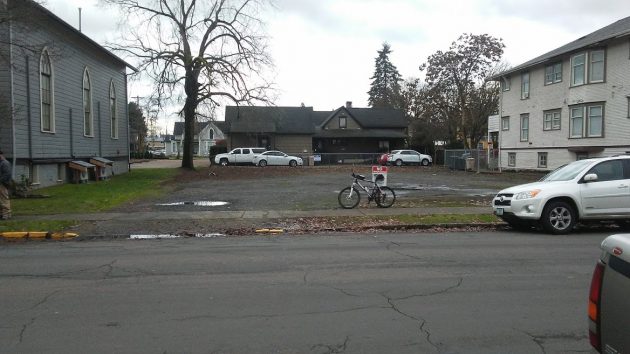 One of these days, but not right away, this lot on Albany’s Third Avenue S.E. may or may not hold eight townhouse-style apartments. That’s what I got out of a long discussion Wednesday by the advisory board of the Central Albany Revitalization Area.

In 2015, CARA granted developers Scott and Spencer Lepman a forgivable $336,000 loan toward their project to renovate the Fortmiller Building at 420 Third S.W. as apartments. Part of that project was to build four attached apartments next door. Then the Lepmans and the city discovered that setback provisions in the development code did not allow the four units to be built, and the Lepmans offered to build eight units at 224 Third S.E. instead.

CARA amended the loan deal to that effect and also contributed to a planning effort to change the development code Those changes were adopted, but then another code provision popped up to prevent both the four units on S.W. Third and the eight units on S.E. Third.

The code requires 6-foot-wide maintenance easements on adjoining properties when buildings extend to the property line in commercial districts, as these housing developments would. But for one reason or another, involving incomplete probate in one case and a possible property sale in the other, the required easements could not be obtained and the apartments on S.E. haven’t been started, let alone completed by the end of this year as required by the amended grant.

Stymied, the Lepmans asked CARA to “encourage the planning staff to resolve” the easement requirement. They also asked for an extension of the completion deadline in their CARA agreement — one year in case they go ahead with the four apartments next to the Fortmiller Building, two years if they decide to build the eight units on S.E. Third.

On Wednesday CARA, and the city council as the urban renewal agency, approved the time extension, to start from when the easement rule is no longer an obstacle. When and if one of the apartment projects is finished by the new deadlines, the CARA loan on the Fortmiller project will become a grant.

Councilman Mike Sykes offered a quick solution: Have the council amend the development code to allow for variances in cases like this, where unforeseen code complications stall projects that everybody wants, such as apartments to increase downtown housing. Sykes didn’t get an answer to his suggestion. But he said he would pursue it.

In a letter to CARA, Scott and Spencer Lepman thanked the city and CARA for their help with the Fortmiller project. “We believe in downtown Albany,” they wrote, “and believe that these projects will provide an opportunity to prove that increased living downtown will help make Albany more livable and the downtown more viable.”

They said the 12 new dwellings they would like to build would add $3.3 million of value to the downtown urban renewal district.

Years ago, the Lepmans got CARA help to convert an old seed warehouse off Water Avenue into the Jefferson Loft apartments. Now, without CARA involvement, they are renovating the Spruce Apartments they own on First Avenue. After that, they’ll probably tackle converting the former post office and city hall at Second and Broadalbin, which they also own.

Can the city resolve the easement issue to enable those Third Avenue townhouses to get built, and when? Your guess is as good as mine. (hh)